Lakes-based fell runner John Fleetwood takes a look at the new Cicerone guide, Trail and Fell Running in the Lake District by Kingsley Jones. There may not be much here for old hands, he says, but for novice runners or newcomers to the Cumbrian fells it's got a lot to offer.

Fell running has been a part of Lake District life for many years, but commercial trail running is a much more recent phenomenon in the area. This book is testament to the vastly increased interest in a sport which has long eschewed the media. As someone who has run extensively over every hill and dale in the Lakes I was intrigued to see what this guide had to offer.

The first thing of note is its size. The book is small enough to put in a bumbag and take with you and is furnished with clear, detailed extracts from OS maps. These are accompanied by detailed route descriptions and interspersed with fell running tips. I struggle a bit with the concept of reading a detailed route description whilst running, but I guess it's there for those less familiar with map reading and can be useful as a backup, particularly in low lying areas. The route summaries are far more insightful, giving a flavour of the run and its particular merits, as well as practical information.

There are 40 routes in total, spanning easy trails, traditional fell runs and a couple of scrambles. Each route is graded from 1 (bridleways) to 5 (difficult, steep or vertiginous terrain), which allows beginners to assess suitability. The start and finish of each run is dictated by the location of a carefully chosen pub, which is a little contrived in a few instances in order to get the pub in, and readers might choose to start at a more convenient car park. This having been said, the hostelries are well chosen and form an important part of the whole Lakeland fell running culture.

There is something for everyone, with several fell race routes, trail runs and elements of the Lakes Skyrace. These range from classic rounds like the Fairfield Horseshoe to a low level trail run around Patterdale, and the long Wasdale and Borrowdale Fell Race routes. Any choice of routes is going to be very personal and the selection of different types of run means that some very good runs are excluded. I'd like to see at least some mention of other possibilities, most notably the Bob Graham Round. The Lake District is a small area, but it is an intimate landscape with almost infinite choice of routes that this guide can only touch on.

But this rather illustrates what this guide is about – inspiring runners who are unfamiliar with the Lake District to have a go and sample some of what the Lakes has to offer. It is not aimed at the gnarly, seasoned fellrunner who eats glass for breakfast. It is for the runner or outdoor enthusiast that wants to have a go. In this respect, the colourful images interspersed throughout the book make you want to lace up your shoes and get out there. I heartily recommend it as a catalyst for doing that.

Trail and Fell Running in the Lake District by Kingsley Jones

Guide to 40 of the best trail, fell and skyrunning routes in the Lake District, including Helvellyn skyline and Scafell Pike direct. Highlights include recces of Cumbria's best ultra and fell race routes including the Langdale Horseshoe and Borrowdale. Includes info on the history of fell running, races and adapting for the fells.

Each route has been carefully graded to indicate the style of running terrain, from wide trails, to single track, or technical skyrunning. This ensures you select a route that suits your experience and aspirations. In addition to the technical grade, distance, height gain and timings are provided. 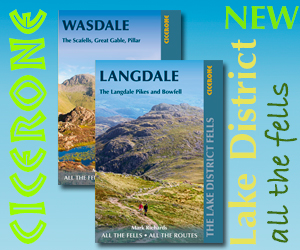 Day Walks in the Cairngorms

The latest title in Vertebrate Publishing's Day Walks series, this pocket guide both celebrates these very special mountains, and invites you to explore them more deeply, says Dan Bailey.

Two new Fellrangers from Cicerone: Mardale and the Far East and Patterdale

Mark Richard's series of eight detailed guides to walking throughout the Lake District fells. Fellranger guides give comprehensive coverage of the mountains, examining all the main paths and routes to the...

A two-week circular trail including the Wrekin, Stiperstones and Wenlock Edgeby by John Gillham.

The Big Rounds by David Lintern

Whether you're a keen hill runner or a walker with ambition, this attractive book is an information-packed celebration of three timeless classics of the British hills - the Bob Graham, Paddy Buckley and Charlie Ramsay Rounds - says Dan Bailey.

Guide book for climbs on Beinn...

Rock climbing in the Lake...

Striking a useful balance of size, features and capacity, the Trailblazer 3 is a handy little waist pack that seems well suited to shorter hill runs, or lower level trail running where you may not need to carry quite so much, says Dan Bailey. I...

Offering generous levels of cushioning and support in a surprisingly lightweight package, the Spin Ultra should be equally at home on long trail running days and gentler local runs, says Dan Bailey. It's worth considering for summer hill walks and mountain crag...

While the Saurus is more than capable on the hills, this a trail shoe that you can also comfortably take onto more urban ground, says...