Share
Reviewed by Tom Briggs 28th June, 2010
This has been read 22,957 times
Price: BMC Member price £20; Non-members £24Brands: BMC
Share
We receive free products for review from brands, many of whom advertise on the site. We work on strict condition of editorial independence, and no guarantee of endorsement
"Much anticipated" would be something of an understatement. If anyone was silly enough to have waited with bated breath, they will have expired some years ago. Indeed, it feels like a lifetime since rumours circulated about Ben Heason repeating every route at Froggatt, in a bid to establish new levels of accuracy in the forthcoming 'Froggatt to Black Rocks' Guide.

But it's here finally, though the timing of it hitting the shelves as we enter what can only be predicted as one of the hottest summers on record does feel slightly misjudged - gritstone aficionados preferring to experience the friction-dependent stone during the cooler months, of course. The editors, Steve Clark and Lynn Robinson, and series editor, Niall Grimes needed to have produced something really special to justify their tardiness. Well, they have.

'The Definitive Guide' sounds a bit 'Ronseal'. In fact the guidebook does a lot more than it says on the tin. Yes, it gives new meaning to the word 'thorough', but this is a guidebook that will reawaken the enthusiasm of all but the most worn out of gritstone lifers. They have taken the esoteric and sexed it up.

Let's face it, for the vast majority of climbers, there was no desperate need for new route descriptions for Froggatt (perhaps they were curious about the definitive grade of 'Blind Vision' or weren't quite sure of the precise line of 'Lonely Heart'?) But Turning Stone Edge was a different matter. Did anyone actually dare try and find the mythical Turning Stone Edge? Well now you can. With its spread of routes across the grades, as well as the odd 'neo classic' boulder problem, this is just one of the many 1 star crags that the guidebook contains.

'Froggatt to Black Rocks' is ideal for locals, for those who sit around their mates' house having a cup of tea trying to decide which crag they can be bothered to visit for the upteenth time.

"Curbar?"
"Nah, done everything... well apart from Elder Statesman of course."
"Cratcliffe?"
"Was there last week."
"Cocking Tor?"
"Excuse me? Cocking what?"


The care and attention given to these esoteric jewels is what makes Froggatt to Black Rocks so special. I will now walk beyond the Walnut Whip and go and have a look at 'Poppers' as I now know a) what it looks like and b) that it can be highballed!

As one would expect from a BMC Definitive Guidebook, 'Froggatt to Black Rocks' is ram-packed with historical ditties, 'best ofs', bouldering circuits, favourite route lists and such like. Indeed, one could easily miss out the climbing altogether and spend a happy afternoon sat on the loo musing over Chris FitzHugh's 'Pieces of Eight. A Proprioceptive Octette in the Innards of Birchen'.

Froggatt to Black Rocks: The definitive gritstone guide – and so much more

It's as if someone has taken that big piece of paper from a brainstorming session about 'how can we make this guidebook better than the last one' and somehow managed to squeeze all of the best ideas in, in a format and layout that works. You too can become a geek. Just read this guidebook cover to cover, then apply to Mastermind. Yes, that's correct: The Screaming Dream is 7m long, was climbed in 1986, took Mark Leach 25 days, has only had 3 ascents and is reputedly in the V11/12 grade range. Never before have so many numbers been provided for such short sections of rock.

Only over a long period of consideration will inaccuracies in this guidebook be spotted (I doubt there are many omissions). Grades on the whole look to be spot on, with quite a few of the harder routes coming down in grade, or now acknowledged to be a different proposition, given the popularity of bouldering pads these days.

There's a decent mix of photographs from the usual suspects, though the bias does seem to be with the upper end of the E Grade and of bouldering (four photos of Eastwood Rocks might be a little over the top). There aren't that many stand out shots of easier routes, sadly. It's excellent, however, to see historical ascents such as Pete Robins' on-sight of 'End of the Affair', held back for the guidebook, as well as some of the iconic images from the Golden period of the mid-80's.

In summary, we've waited a long, long time for this guidebook. Some of us had almost given up climbing and taken up mountain biking instead. But it's here at last and once the leaves begin to fall from the trees, we will roam, paper brick in hand, like hunters once again. I for one am already licking my lips in anticipation.

"I am a climber, originally from the Lake District, who participates in most aspects of the sport. I've always loved bouldering and the technicality and accessibility of gritstone climbing, but I have also travelled extensively to rock and ice climb and have been on a number of expeditions to the Himalayas, Greenland and Alaska. I am married to Rachel and live in Sheffield where I co-run Climb Trek Ski Ltd (Jagged Globe) with Simon Lowe. I am what you might call an "obsessive climber type". 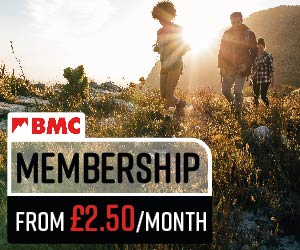 The Munros - the definitive new hill guide from the SMC

The fourth edition of this classic guide not only offers the most detailed and comprehensive route descriptions to Scotland's 3000-foot peaks available in print, but it looks great too, with a smart layout and quality...

This attractive new large format guide is an inspiring addition to Irish hill literature, covering every major summit and upland area across Northern Ireland and the Republic. Dan Bailey feels a post-Covid Ireland trip coming on...

During the less restricted summer months Mark Reeves has been working away on an amazing new book covering mountain walks and scrambles in Snowdonia. Have a look now and get some inspiration for next summer when hopefully we will...

Over the past year the Scottish Mountaineering Club (SMC) has been working with Rockfax to digitise their back catalogue of climbing guidebooks. Earlier this year Scottish Sport Climbs was added to Rockfax Digital,...

flaneur
28 Jun, 2010
This is a wonderful guidebook. The validity of definitive guides is increasingly questioned but the love and care evident in the documentation of the smallest and slightest scrap of grit is the perfect riposte to this notion. Buy it and discover gems - whole crags of them - you never knew existed. I'm going to claim a tiny contribution - recycled joke, p460 - where is my free copy then!? (Although perhaps it should go to The Guardian sub who came up with this: http://tinyurl.com/29twv7u)
Add Comment
Please support the following outdoor retailers who support UKHillwalking.com: