The Dolomite Steinbock WT GTX are a fully synthetic, lightweight yet supportive, hiking boot. Dolomite says it is "designed for summer hikes and day-long mountain excursions". I suspect that is meant to convey that the Steinbock are comfortable to wear all day, rather than you shouldn't use them on multi-day excursions. Indeed I have found that, from new, they are comfortable to wear all day, but I have also used them on overnight backpacks without any dire consequences!

The boot is moderately stiff, particularly in terms of edging, and supportive despite its minimal weight (1025g for UK size 7.5). This stiffness helps on rough ground and when carrying a heavy load. Testing the Steinbock "off label", I've also found they climb surprisingly well for a boot not designed particularly for scrambling, let alone mountaineering.

I've used them on gritstone routes graded Moderate without any problems, along with Peak District scrambles (which tend to be boulder-filled stream gullies steepening up to short pitches next to a waterfall or two). Even with the lockdown easings, I haven't had opportunity to go to the Lakes or North Wales since getting the Steinbocks but, from using them in the Peak, I would have no worries at all about using them on the great Welsh ridges like the Llech Du Spur or Crib Goch, or classic Lakes scrambles like Jack's Rake or Sharp Edge. Dolomite give a helpful "flex index" to their boots; the Steinbock is "medium", putting it between the "flex" of a walking boot like the Kendal:

...and the "hard" of the crampon-compatible Torq Tech:

After one long day of hiking (over 25km) at a decent pace, my feet were distinctly tired and I had some pain in the balls of my feet, but the final 5km had been along a surfaced lane, and I was using the insoles supplied rather than my normal Superfeet insoles. So don't expect the comfort of trail shoes; but then you can expect much more support on rough ground than you get from trainers.

A thermo-formed suede leather version of the boot is available (£220) but in the case of the Steinbock WT GTX model that I've reviewed here the uppers are fully synthetic. What is noticeable is the lack of any visible stitching except at the back of the boot, over the heel. Using clever weaving and lamination technology it seems each boot is made out of essentially one piece of material ("Perspair® Woven fabric") with a Gore-Tex layer and inner fabric inside that. The membrane means the boots are completely waterproof - I've stood in a number of streams to check this. Of course many modern boots rely on a waterproof membrane to keep water out. I find they work very impressively when new, but it's very hard to predict how long the membrane will keep working, and there is little you can do once you do get a leak. The Perspair fabric on the Steinbocks seems very tough - puncturing the Gore-Tex from outside seems unlikely but bits of grit getting into the boot and wearing with time through the inner and into the membrane seems to be a way in which a waterproof liner can fail.

I remain a fan of gaiters - either standard length or shorties - both to help keep your feet dry more generally and to help to prevent liner failure.

Overall, the Steinbocks are surprisingly supportive and protective feeling for boots that are only just over a kilo for the pair - I think this makes them well suited for rough and rocky terrain rather than for wearing for long days doing big mileage on well made trails or tracks.

The sole is worthy of note. Rather than the ubiquitous Vibram, Dolomite have used Michelin All Terrain soles that they claim "ensure an excellent impact absorption, traction and grip." I've heard, at best, mixed reports of Michelin's boot soles in the past, but these are - as far as I've experienced so far - superb. They have an aggressive tread pattern which grips on mud and wet grass as well as anything, but they seem to grip really rather well on wet and muddy rock too - even polished limestone slabs. I think that the Michelin soles on the Steinbock are great.

Coming in both men's and women's versions, Dolomite say the Steinbock is a "regular fit". I'm not completely sure what that means, but they fit my wide feel well enough. For decades I thought I was UK 8/Euro 42 but often that meant lots of space in front of my toes in order to get the width. In recent years I've been increasingly trying 7.5/41.5 which is what I went for in the Steinbock. The 7.5s perhaps are a tad snug in width but I've had no blisters or hot spots from that, and they feel like a snug fit elsewhere.

The first time I used the boots we did a 15km loop in the White Peak taking in Chrome Hill. I was carrying my nearly 3-year-old for much of it in a child carrier - the combined weight of which must be about 18kg - and boots were superb, not a blister, not a hotspot. After the 25km day in the northern Pennines, the second day of an overnight backpack (although I only walked about 8km the afternoon before) my feet were tired but again no blisters.

Overall the Steinbocks are great boots - I even think they look quite cool, although these things are in the eye of the beholder! Perhaps they're best for day walks or short backpacking trips in rocky and rough mountain terrain rather than long distance hiking on gentler, hard-packed trails. With my dodgy ankles from decades of stumbling around hills and mountains around the world, I've often been grateful for the support the Steinbock offer. With an RRP of £200 they aren't even particularly expensive for durable and protective boots for tough 3-season hikes in the mountains, and I suspect they are lighter than most that give as much support.

The Steinbock WT GTX is a lightweight high-performance shoe, designed for summer hikes and day-long mountain excursions. Crafted to provide the ultimate freshness to the wearers feet, it features a high-tech Perspair® upper, a Climafresh Ice Capsule footbed and a waterproof Gore-Tex® lining: a skillful combination of technologies which ensure a revolutionary breathability and lightness. The innovative Michelin® All Terrain sole ensure an excellent impact absorption, traction and grip. A full package of features which make this hiking shoe a must-have for modern trekkers. 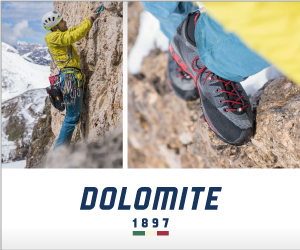 Steinbock WT GTX, the jewel in the crown of Dolomite's hiking section. A lightweight, high-performance shoe, perfect for one-day excursions or mountain trail walking. The ideal product for meeting every need and guaranteeing the best...

Steinbock WT GTX, the jewel in the crown of Dolomite's hiking section. A lightweight, high-performance shoe, perfect for one-day excursions or mountain trail walking. The ideal product for meeting every need and guaranteeing the best hiking experience...

Lost shoes at the Cobbler North...

They're no lightweights, but the Vultur Vertical GTX are superb solid B3 boots, which combine warmth, comfort and technical performance, says Dan Bailey.

If you want a versatile B2 boot for scrambling and high mountain via ferrata as well as summer Alpine routes and Scottish winter...

The Breithorn's claim to fame is its affordability. So are they good enough to justify not spending more on a higher end walking boot? For...

The Veloce GTX from Dolomite is aimed at mid-altitude summer mountaineering, via ferrata and approaches over hard terrain. It has an...

The V2 Suilven is a really decent lightweight summer walking boot at a price you just can't argue with, says Dan Bailey

All Round B1-B2 Mountain Boots