Share
Reviewed by Bridget Collier 27th January, 2012
This has been read 5,710 times
Price: £27.99
Share
We receive free products for review from brands, many of whom advertise on the site. We work on strict condition of editorial independence, and no guarantee of endorsement
The WLP anti microbial hydration system bladder from Source is a different shape of bladder specifically designed to remain slim and avoid bulging as the liquid is drunk. It looks a bit quirky and I was a bit surprised when I opened it up and saw that it looked more like something soothing to sit upon after a long mountain bike ride. I've used it over the summer to test whether this design does what it says.

Over the years I've had hydration bladders from at least 4 different manufactures and I already owned the Source 2 litre widepac bladder so it was ideal to test this new design against previous experience and directly against the traditional shape.

Does it do the job?

Filling it up from the tap is easy with the slide at the top and the large opening and it has a nice secure feeling about the seal when the slide goes back over. The clip in drinking tube is the same between all types of Source bladders so you can transfer them if necessary. But the test is whether this new design works. First off I put the WLP bladder into a larger sack full of climbing kit, I couldn't tell the difference or even that it was in there – so no advantage there, but it's not really meant for that use. I reached for my minimal tiny running / biking sack and it all became obvious.

I set off on my favourite run on the west Pennine moors running with just the WLP bladder and waterproof. To test for "the slosh" I filled the WLP anti microbial hydration system ¾ full from the start. Half way through the run I cowered behind the cairn on Great Hill to empty the contents into the Widepac 2 litre bladder and set off again. I hadn't expected to notice much difference but it was apparent immediately. I felt the slosh and gentle bumping against my back where there had been none before. I've run with the typical design of bladder as well as the horizontal type bladder on plenty of occasions before with varying degrees of comfort but the new WLP bladder was more comfortable and I'd say perfect to use in a high activity sport. It makes it a specialist bit of kit but worth choosing over others where 1.5 litres is enough – typically running or mountain biking for me.

Also worthy of note is that over the 2 years I've used the Source bladders, the clip in tube has worked perfectly, never leaked and is easy to remove for cleaning or to leave the tube in place in your sack, unclip and fill up the bladder. The dirt cover for the mouthpiece has saved me from many mouthfuls of grit (or probably worse from farmer's fields) and the screw action on the bite valve means it doesn't leak no matter what pressure is on the bladder in the sack.

Cleaning these bags is often a pain. Source have what they call a grunge guard anti microbial system. This is an atomic force microscope (AFM) surface that basically makes the surface so smooth nothing sticks to it so it is self cleaning. This helps although I've still had mould on the tube cleaner when I eventually get around to doing it – although this might be due to my love of Vimto and my lack of love of cleaning these things (they often sit in my sack until I next use them and cordial does go off after a while).

I'd say that you do need a bottle brush and hose brush to clean them properly. It's worth checking the Source website out though as I've noticed both brushes can be purchased separately which is handy.

Yes it does and the design gives it a specific advantage as outlined. The price is similar to other Source or Camelback bladders and the features ensuring it won't leak, and helping with hygiene are what set them well above cheaper models on the market. After the summer season of use each weekend mine is still going strong.

Bridget likes to be outside when not chained to the desk in her office job. She started climbing when turning 30 on the local Lancashire quarried gritstone crags and since has enjoyed many Alpine summer and winter trips as well as getting as far as the via Ferrari route on Alpamayo, Peru and the various spires in Moab, America. Mostly though it's weekend warrior stuff in North Wales and the Lakes with fellow members of either the Vagabonds club or the Climbers club.

She also loves fell running (and used to love mountain biking until the running took over). Routes generally include a lot of mud over the west Pennine Moors or locally around Hilldale. She's completed several RAB mountain marathons and local fell races including the Winter Hill Race but sometimes just sets her own challenges running over various peaks in Snowdonia from the Vags hut in Nant Peris. 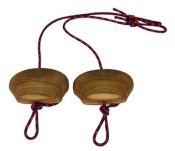 The all new, totally re-designed Simulator training board. Get strong this Winter! 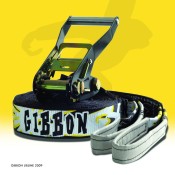 New for 2009, this is the ultimate Slackline for ease of use and allows for the best environment for tricks, style and progression... 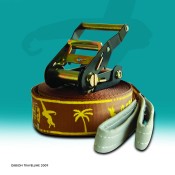 New for 2009, this is a slim and stylish line that is a perfect size to fit into a rucksack or to tuck away in your car for the impulse Slackline opportunist!