Life of a Mountain: Blencathra Review

Share
Reviewed by Dan Bailey UKH 26th April, 2016
This has been read 4,896 times
Price: £14.99
Share
We receive free products for review from brands, many of whom advertise on the site. We work on strict condition of editorial independence, and no guarantee of endorsement

​In February UKHillwalking interviewed film maker Terry Abraham about his new project Life of a Mountain: Blencathra (see here). With the film due for release in May we've had a sneak preview.

Building on 2014's hugely successful Life of a Mountain: Scafell Pike (review here), Terry Abraham's cinematic love affair with Lakeland's landscape reaches new heights in his forthcoming film Life of a Mountain: Blencathra. Romantic without being sentimental, one minute sweeping and dramatic, the next intimate and personal, this understated yet heartfelt film is his most accomplished to date.

Terry Abraham has been around long enough now to talk about a trademark style, and this is vintage stuff - piercing shafts of sun, soft mist, moody weather, sunrise and sunset lighting and dramatic panning shots - and all painted in a palette of rich colour. Drone footage is used frugally but effectively, a sensible discipline in this age of technological oversaturation. There's something lulling and gently reassuring about the effect of it all, from the meditative pacing to the obvious love for the hill in every shot.

The title gives a big clue what to expect - Blencathra, and loads of it; nearly two hours all told. But as ever with his work there's far more to it than rocks and grass, as we follow the fell through all seasons and weathers, seen though the eyes of a huge human cast. It's the poeple that make it the film that it is. Over the year in which he shot it Terry Abraham enjoyed dozens of solitary summit camps, and claims to have lost count of the number of ascents he's made; but this sheer volume of interview footage must have taken weeks to produce too.

Wainwright (yes him again; will we never escape?) wrote more about Blencathra than any other mountain, TV researcher and guide David Powell-Thompson tells us in the opening minutes, a reflection of the esteem in which he held it. Wainwright was not alone; there can't be a hillwalker alive who would not feel drawn to its unique profile. But this particular mountain, currently the target of a potential community purchase, has a resonance that goes far beyond the walking fraternity. Life of a Mountain explores Blencathra's attraction, the landmark place it holds in people's lives.

The balance of landscape and talking is well handled throughout the film, a series of mini interviews slipped deftly between layers of majestic mountain scenery. All sorts of characters pass through, from well-known DJs and comedians and the ubiquitous Alan Hinkes, to local farmers, dry stone wallers and some really engaging kids in Threlkeld school, the village that's more or less defined by its location at the very foot of Blencathra. Each has a slightly different take on the mountain, helping to build a picture of its place in a wider community.

"Mountain films can be so po-faced. There ought to be more banter like this"

Fell racing, snow boarding, scrambling, path-building or just dog walking - you get the impression that half of Lakeland spends its free time on the fell. If you've ever been there on a sunny bank holiday you'll know that's not far off the mark.

For me, probably the most entertaining episode follows that Stuart Maconie off the radio, revelling in the current nearly-coolness of walking and the place that Blencathra holds in his heart before 'enjoying' a very nervous ascent of a breezy looking Sharp Edge in the company of wise cracking comic Ed Byrne, and under the watchful fatherlike eye of David P-T. Mountain films can be so po-faced. There ought to be more banter like this. But there's a message here too - Sharp Edge may be the absolute limit for some, but hill-goers of all stripes can find their own perfect level of adventure on a Lakeland fell of this quality.

But just when old Saddleback is beginning to feel too familiar, too gentle, Terry Abraham hits us between the eyes with one of his winter sequences, and the friendly local fell suddenly seems to grow teeth. Billowing spindrift, delicate cornices, sharp-etched ridges and a menacing glint to the snow; look, it's a mountain after all - and a really great one too.

If you've been keeping an eye on the latest developments in adventure film over the last six months, you'll have been hard pushed to miss the release of the Brit Rock Film Tour. The latest project from leading mountain filmmakers Posing Productions, the... 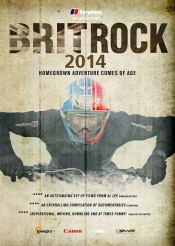 The all new Birt Rock Film Tour 4014 is out now on DVD and HD download.

RyanOsborne
26 Apr, 2016
Looks great, the Scafell Pike one was excellent as was the Cairngorms in Winter. I bet some of the remote NW Scotland mountains would be good for something like this.
Add Comment
Please support the following outdoor retailers who support UKHillwalking.com: