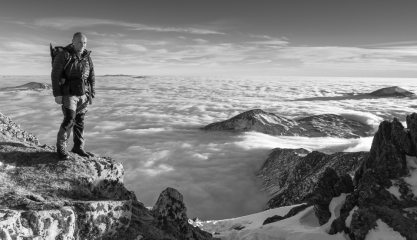 When it comes to half day outings in Snowdonia, the ascent of Moel Siabod via the ridges that enclose Cwm y Foel is up there with the very best. Falling short of 3000er status by a measly 140ft, Siabod is often less crowded than the headline grabbing giants across the valley. However, make no mistake, old Siabod rewards those who visit him with some fantastic scrambling and possibly the finest view in the whole of Wales. When time is short, summer or winter, Moel Siabod is quite simply ‘the’ place to be.

1
SH7358357101 Turn right out of the car park and after a couple of hundred metres turn left to cross Pont y Cyfyng bridge. Before long a steep tarmac path branches off on the right and continues to a diversion through the bracken which leads to a renovated farmhouse and a stile.
2
SH7301256560 Cross the stile and walk easily down a grassy cart track which comes as a welcome respite from the steep introduction. Ahead your peak looks superb and though you’ll be chomping at the bit to get it beneath your boots try not to rush, there are fantastic views of the eastern Carneddau to be had if you care to look.
3
SH7242156230 After a couple of stiles the path swings leftwards passing a small llyn before rising through spoil heaps to an abandoned quarry. This is a very atmospheric place with small waterfalls feeding into a dark pool and gives the feeling that if you don’t keep an eye on your sandwiches a pterodactyl may well swoop down and pinch ‘em!
4
SH7179255546 Pass the quarry on the left and then bear right to pick up the path above it. An eroded peaty path now makes its way through wonderfully wild feeling country until you come upon Cwm y Foel. Of the numerous cwms in Snowdonia this is surely one of the most beautiful. Below is the captivating Llyn y Foel and bursting into view straight ahead is your route of ascent, the Daear Ddu ridge which looks somewhat daunting. Fear not, it’s as easy or difficult as you want to make it. Getting to the start of the ridge is a classic bogtrot and one can choose to cross the cwm either side of the llyn. After many visits I have come to the conclusion that going the long way around the eastern shore offers the driest passage.
5
SH7131054546 The base of the Daear Ddu ridge is rather ill defined so pick any line you like the look of up to the crest through broken rock and heather. Once established on the ridge you’ll see that rather than the terrifying knife edge its initial appearance suggested it is in fact broad and virtually unfalloffable! All that remains now is get stuck in and have some fun. The great thing about the Daear Ddu is that you can vary the difficulty to suit your ability and it is possible to do the whole thing without reaching even grade 1 though sticking to the right hand side of the ridge provides some wonderful positions and considerable exposure near the top. The not so great thing is that if the rock is at all wet it becomes very greasy so watch it!
6
SH7049454623 At the top of Daear Ddu the summit trig point comes into view and after a few steps the most incredible vista (weather permitting) will have you struggling for superlatives, especially straight down the barrel of Cwm Dyli into the Snowdon Horseshoe. No doubt you’ll want to linger so, if it’s too windy for comfort take advantage of the large circular shelter just a stone’s throw from the trig point.
7
SH7074454928 For the descent head NE over the stony plateau to reach the bare rock of the NE ridge. Though less of a scramble than the Daear Ddu it is a fine, airy place to be. Keeping to the crest there are a couple of amusing bum slides and interest is maintained by peering down two deep gullies which split the Cwm y Foel face. After the second gully is passed there is a short easy scramble to regain the crest before the rock peters out and gives way to grassy slopes. Slatey runnels constitute the path down until a broken fence is reached near the cart track. It’s then a simple matter of retracing your steps back to the start and maybe a cuppa in the cafe.
Share:

number of votes 16. Login to vote

Start/Finish:
The large, free car park at Bryn Glo just beyond Pont y Cyfyng on the A5, SH735571

Terrain:
Metalled road, grassy cart track, good paths and a boggy cwm lead to sections of avoidable grade 1 scrambling. The rock on both ridges offers superb friction in dry weather but can be very slippery in the wet.

Seasonal variations:
Taken at its most direct the Daear Ddu Ridge just about qualifies as a grade I winter climb.