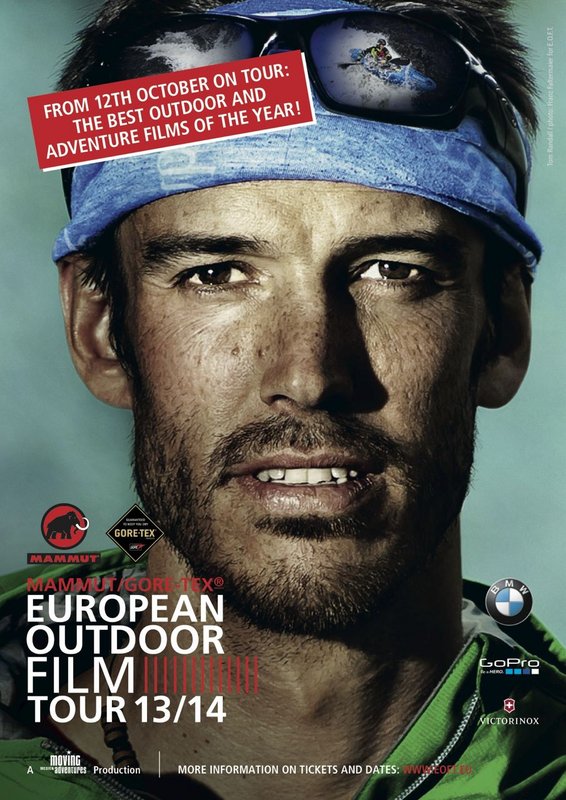 The European Outdoor Film Tour is heading back to the UK, kicking off with the premiere in Edinburgh on Friday night before heading to Glasgow on Saturday, then Bristol, Leeds, Manchester, Liverpool and London.

Tickets are available for some locations (Bristol sold out!) but selling fast so grab your tickets (£12) from outdoor clothing and equipment specialists Ellis Brigham both online and in store from branches in tour towns and cities.

The two-hour programme - which tours 200 venues in 9 European countries - features the E.O.F.T’s special edit of 9 of the world’s best adventure sports films including climbing, mountain-biking, kayaking, surfing and BASE jumping.  Other chances to watch the E.O.F.T. include Glasgow (16th), Leeds (19th), Manchester (20th), Liverpool (21st) and a double finale at the the Royal Geographical Society in London on 23rd November.

Audiences in Liverpool and London will have the chance to see top British climber Tom Randall, star of the tour's headline film 'Wideboyz' who will be joining to the tour to do live Q&As at the Epstein Theatre and Royal Geographical Society.

Tom Randall said:  “I'm thrilled to be involved with the E.O.F.T. this year as it's such a huge event in Europe and it'll be great to see it tour across the UK. I've seen the line up of films and they look totally amazing - there's something in there for everyone. I can't wait to be at the Liverpool and London events in person”.

The award-winning ‘Wideboyz’ (from Edinburgh based Hot Aches Productions) tells the story of Sheffield climber Tom and his partner Pete Whittaker’s attempt to conquer the world's hardest off-width route, Century Crack in the USA.  Described as ‘ultimate fighting with a rock’, offwidth crack climbing is painful and bloody and there are hardly any routes in the UK.

“The whole Wideboyz episode was a huge lift-off in my climbing career and I can hardly believe where it has taken me.  The process of training from humble beginnings to eventually climbing the hardest offwidth in the world has taught me a lot of about self-belief.  Pete and I have also developed a strong climbing partnership, which has been incredible.  I'm not sure either of us could have achieved it on our own!”

Tom and Pete recently made a successful ascent of one of the hardest finger cracks in the world, Cobra Crack, in Squamish, Canada.

“This year, we've taken everything we learnt from Century Crack and applied it to thin cracks! It's been the same journey of starting low, building up, enduring a lot of pain and finally travelling to the hallowed ground of Cobra Crack in Canada to prove ourselves. We feel pretty chuffed to have pulled off another ascent of one of the top 3 hardest cracks in the world, when we're just two Sheffield lads who train in a 6ft high cellar.”

Star of last year's tour, Peter Ortner, climbing partner of David Lama in "A New Perspective" says: "For me the E.O.F.T. is a very special event because the world best athletes have the opportunity to show their latest projects and kind of compete with the best.  No matter what your sport, it´s simply about being your best."

Ulf Michels from E.O.F.T. tour organisers Moving Adventures, said: "For us, the recipe is simple - we cherry pick the year’s best adventure sports films, mixing up sports from climbing to canyoning to biking and BASE jumping and trim off any of the boring bits to create an inspirational 2 hour special edit.  To top it off, we throw in some great audience prizes to guarantee a superb atmosphere and an unmissable event”.

“We really appreciate the continuing support of our title sponsors Mammut and Goretex as well as our retail ticket partner, outdoor clothing and equipment specialists Ellis Brigham.”

Wideboyz - British climbers Tom Randall and Pete Whittaker are self-taught experts in strange sub-culture of offwidth-climbing - the most brutal form of crack climbing (“the size where nothing fits”). To the great astonishment of U.S. locals - they claim the first ascent of the world’s toughest offwidth route in Moab (Utah). Their secret weapon? Two years spent training on a perfect replica of Century Crack, built in Tom’s basement.

The Road from Karakol - The American alpinist Kyle Dempster has chosen a far less secret but almost as isolated location for his road trip adventure from Karakol in Kirgysistan.  With only a camera as a companion, he sets out on bike to climb the country’s last unconquered peaks. Those are the facts. As for the rest?  Only uncut memories - abandoned roads, ghost towns and an obligatory boozy session with the Kyrgyz military police. Between roaring rivers and huge mountain vistas, he comes to the conclusion that every adventure has its light and dark moments - and that we use the word “suffering” too frivolously.

North of the Sun – the award-winning, surf/environmental documentary “North of the Sun”. Picture a small hut, sheltered under the rocks on a lonely beach in the Arctic Circle that’s not seen sunlight for more than two months. Built entirely from flotsam and jetsam, it’s home to Norwegian surfers Inge Wegge and Jørn Nyseth Ranum.   In search of the North Atlantic’s best waves, the pair spend nine months cut off from civilisation - no internet, no commitments, no stress. Accessible only on foot, the bay’s location remains a secret - “Everyone should find their own paradise.”  But nowhere’s perfect. It so cold even their olive oil freezes and they have to boil water to defrost their surf boots. Winter becomes an endless quest to collect, saw and chop driftwood to stoke their recycled oildrum stove. But that’s not all the ocean washes up on the shore - and so begins their campaign to clean up their beach and stop paradise turning into a rubbish dump.

Supervention -  Freeriding on the next level with the stars of the international skiing and snowboarding scene. Filmed in Norway, Alaska, New Zealand, and  — a name you should remember!  (The E.O.F.T. will screen an exclusive short 10 minute edited version of Supervention).

NotBad - This is a tale of epic adventure. A tale of seven brave riders who set out from the four corners of the globe to gather together under one roof in a town located at the ends of the earth. Set in the Queenstown, New Zealand the bicycle posse takes over dirt jumps, chase down sheep and massacre watermelons with chainsaws. This is a tale with no beginning and no end but where a few things happen in between. Things like eel fights. Yeah that’s right... f’n eel fights.  (The E.O.F.T. will screen an exclusive short 8 minute edited version of NotBad).

Cascada -  No kayaker can resist the magic of the Mexican jungle with its torrential white-water canyons and waterfalls - even if the continuous rain and voracious mosquitoes turn the trip into an endurance test for the whole crew and their equipment.

Sound of the Void -  Sébastien de Sainte Marie feels safer in the mountains than in a car or on a plane, even though the Swiss steep skier picks the lines hardly anyone else dares risk. On slopes like the 55-degree north face of the Gspaltenhorn one wrong move could prove fatal.

The Beginning -  Water always finds its way—and the Deap canyoning team shows us how. The group plunges headfirst into numerous mountain streams and pools and proves that this wet and cold torrential fun can be taken to entirely new acrobatic levels. High diving is a thing of the past: canyoning is a must for all adrenaline junkies who love mountain and water sports - even if your trousers sometimes look worse for wear afterwards.

Petit Bus Rouge - Roll up! Roll up! The Frenchies Flying Circus is in town: they are the “enfants terribles” of the international B.A.S.E. jumping scene, putting on clown shoes before climbing, adjusting the wig before the next jump and most importantly: they don’t take the state of affairs as seriously as it is!  With daring stunts and reckless moves in dizzy heights, the circus crew of Petit Bus Rouge shows that adrenaline and humour go hand in hand. Touring Europe in their blazing red fire truck, these outdoor artists take you on wild ride as they’re highlining on the Atomium, launching themselves from the truck in high speed and using their fellow paraglider as a catapult. Welcome to the greatest show on earth!

For the all the latest news, visit http://www.eoft.eu/programme-1314

After a sell out event in 2018, Berghaus are bringing the Women in Adventure session back to Kendal. An inspirational line-up of athletes and adventurers. We're delighted to announce this year's speakers are...

Lowe Alpine are ready to #MOVEYOURWORLD at Kendal Mountain Festival 2019

Team Lowe will be at the infamous Lowe Alpine Yurt at the festival Basecamp at this years' Kendal Mountain Festival for a jam-packed weekend of adventure talks and activities to #MOVEYOURWORLD.

An evening of CLIMB at George Fisher

We launch our new book 'CLIMB' with a talk by local climber Ron Kenyon and a special screening of the Patagonia film 'Mountain of Storms'.