Share
Press Release by Salewa UK 14th June, 2018
This has been read 4,558 times
Brands: Salewa
Share
Press Releases at UKH present climbing, walking and mountaineering posts that will be of interest to our readers. They are not editorial and are provided by companies that advertise with UKClimbing Limited.

Mid-July sees one of the UK's toughest mountain races kick off from Ambleside in the Lake District. The Lakes Sky Ultra, sponsored by Salewa and Dynafit, packs in 56km of elevated ridgelines with breathtaking exposure and fast and furious descents; extreme mountain racing at its best. With 4,500m of vertical grind, this race is not for the faint hearted and competitors need to be competent on steep rock scrambling sections.

Inspired by the great sky races of Europe, the Lakes Sky Ultra is the most technically demanding course-marked race in the UK, and part of the Skyrunning UK national series. Entries are vetted to ensure that only the most experienced runners tackle the ultra-distance route, which takes in Dove Crag, Hart Crag, Fairfield, Dollywagon, Helvellyn, Nethermost Pike, High Street, Thornthwaite Crag, Stoney Cove Pike and St Raven's Edge. En route it traverses three of the most iconic ridgelines in the Lake District; Swirral Edge, Striding Edge and the grade 3 Pinnacle Ridge. It's an epic day out.

And just as you're nearing the home straight, there's a final sting in the tail: the King of the Mountains Up- and Downhill Super Stages are battled out on Red Screes, the last hill of the day. It's a race within a race, and the prizes will go to the runners who can dig the deepest in the final fight to the finish.

The Lakes Sky Ultra takes place on 14 July 2018. Entries are just about to close, but if you're interested in an unforgettable mountain racing experience, get in touch via lakedistrictskytrails.com

The Lakes Sky Ultra is sponsored by Salewa and Dynafit, and planned and delivered by Mountain Run, the UK's leading school of extreme mountain running. 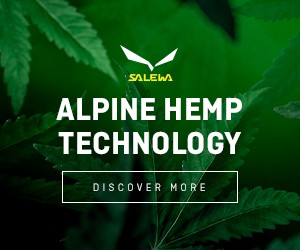 Anna Taylor has completed what is believed to be the first continuous, self-powered round of the 100 routes that feature in Steve Broadbent's 'Mountain Rock' guidebook. In the course of just 53 days, Anna cycled, ran and walked...

In this episode of COROS Convos, two of the greatest mountain athletes of all time sit down together for the very first time.

It is thoughtful they've avoid the lakes most popular scrambles and it's busiest time of year.

Did they get their ropes back?

Not as far as I know.

More Comments
Add Comment
Product News at UKH presents climbing, walking and mountaineering equipment posts that will be of interest to our readers. Please feel free to comment about the post and products on the associated thread.
Please support the following outdoor retailers who support UKHillwalking: