The Other Side Fri Night Vid

The Other Side is a short film that sensitively deals with the raw pain of losing a child to suicide and the strength it takes to move beyond that, to the other side, and to build something positive out of the grief.

Suicide is the leading cause of death for under 35s in the UK. It's an alarming fact that's still not talked about enough. In December 2018, Andy Airey received a call that forced him to confront the reality of young suicide. His daughter Sophie had sent messages that suggested she wanted to end her life and she had since gone missing. Awaiting news a few days later, his worst fears were confirmed; Sophie's body had been found.

Shot in the Lake District fells, a place both he and his daughter loved and somewhere he now finds solace, the film features Andy talking about memories of Sophie, about the tragic circumstances of her death, and detailing his inspiring decision to take her place in the Northumberland Half Marathon shortly after she died in order to raise money for PAPYRUS Prevention of Young Suicide, a national charity.

Produced by Mammut in association with Andy and PAPYRUS, The Other Side aims to build awareness of PAPYRUS and in particular their HOPELINEUK service, a helpline that provides confidential support and advice via telephone, text and email to young people with suicidal thoughts and to anyone worried about a young person who may have suicidal thoughts. HOPELINEUK is available to call on 0800 068 4141, to text via 07860 039967, or to email on pat@papyrus-uk.org. Open 365 days a year, it takes 100s of calls, texts and emails every day from all over the country. Find out more about PAPYRUS, the services they offer, and how to support them on their website, www.papyrus-uk.org. 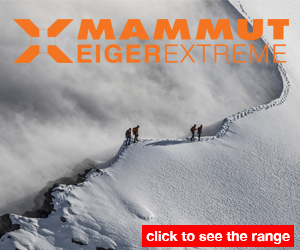 In this video, Anna Hazlenutt and friends tackle the stunning Liathach Ridge Traverse, one of Scotland's great scrambles.

The mountains of Western Scotland can be imposing to some, but to others, their remote and seemingly endless nature have a meditative appeal. An avid and capable climber, Kirsty Pallas takes to the outdoors to offer her...

This week's Friday Night Video follows a three week expedition across the wilderness of British Columbia. Filmmaker Jordan Manley, Chad Sayers and Forrest Coots boat bushwack, ski and packraft across the spine of the Coast...

Our Friday Night Video this week is from Dom Bush from Land and Sky Media. The film is based on a conversation with his friend, Ian...

Our Friday Night Video this week takes us to Annapurna with a team of four friends. Their original objective was a new route on the largely...

Liv Sansoz has a breathtaking CV. She's a two time World Champion in sport climbing, has climbed 8c+ and has a number of hard...

Very moving. I'm sure it will never make up for your loss bit well done Andy for making something positive out of this.

What a beautiful film. So sorry for your loss.

What an incredibly moving and powerful film. Well done Andy for being so strong.

Great vid and something that many will relate to. Whilst I'm one of the lucky ones who has never contemplated such thoughts, I've known 2 friends who came to that point where they brought their lives to an end. Much of the sentiments many of us can relate to when thinking about those we've lost. Losing a friend is bad enough but a daughter must be awful. Massive respect to him for sharing that in such an open way.