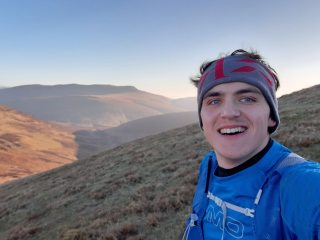 Daniel Dalton25th June
This has been viewed 1,414 times
Share

The hills that lie north of Skiddaw and Blencathra are known by hillwalkers and locals alike as the Back O'Skiddaw. Grassy and heathery with very little rock, seeing another walker is something of an event in these deserted hills, and the miles pass easily. It's a very rewarding day out. On a clear day, views can stretch to Carlisle, over the Solway Firth, and across to the North Pennines. Starting off in the Mosedale valley near the Old Carrock Mine and the River Caldew, an easy ascent to the top of Carrock Fell commences the start of a splendid undulating fell top traverse of High Pike, Knott and Great Calva, eventually dropping down to the Cumbria Way to return to the road head.

1
NY3288132701 Poddy Gill joins the River Caldew just before the road end. A path provides an easy ascent on grassy slopes, beginning to trend right as height is gained. Join the ridge to the east of Round Knott and a short walk follows to the summit of Carrock Fell. The top is marked by a cairn, which is enclosed by an old Iron Age fort, and a wind shelter.
2
NY3418833637 Follow the ridge westwards on a clear path. The section just before Milton Hill can be notoriously boggy after wet weather. After a mile and a half the path forks right after crossing a stone track, soon leading to the top of High Pike. The summit has a cairn and a trig point linked by a shelter wall of stones; slightly north is another cairn which marks the ruin of an old shepherd's hut.
3
NY3186634945 Returning down the path to join the Cumbria Way, turn right at the top of Hare Stones, marked by a few big stones. Make a beeline south-west across heather - a plank covers the worst of the peat/wet ground - then make a quick climb to the summit of Great Lingy Hill, which is marked by a cairn.
4
NY3098933949 Return to the main track near the Lingy Hill Hut, a mountain bothy mainly used by those on the Cumbria Way. The path climbs steeply up the side of Coombe Height, bending right as height is gained. An extensive grassy top is reached which is eventually marked by a central cairn, after a little more ascent, marking the summit of Knott.
5
NY2960232939 Follow the left side of the broad ridge from Knott south-west down to a col on a faint path. A good path appears after the col, heading for Great Calva; however this must be abandoned for the heathery slopes which are best tackled head-on for the Little Calva top that is marked by a wire fence and a pile of stones. Follow the fence round over boggy moorland to rejoin the main Great Calva path, which leads directly to the summit after a short steady climb.
6
NY2906431109 Follow the fence 100m south to the lower of the two summit cairns. From there great vistas can be seen of the valley and Skiddaw House. A ruined fence leads east down heathery slopes back to the Cumbria Way at Wiley Gill. From there follow the main footpath that runs parallel to the Caldew for about 3km back to the starting point. All in all, you'll have visited four Wainwrights and seven Nuttalls.
Share:

number of votes 4. Login to vote

Start/Finish:
At the end of the surfaced road leading to Carrock Mine from the hamlet of Mosedale, 11 miles west of Penrith, NY328327

Terrain:
Grassy and heathery throughout, with a slight scramble at the top of Carrock Fell. Easy undulating terrain, slightly wet underfoot in places.

Seasonal variations:
After wet weather parts of the route can get boggy and can be quite tricky to pass dry shod.

Good work! This is a beautiful route with a wild feeling you don't get on many of the fells!

Cheers! Living locally, I’m up there all the time, a fantastic part of the lakes that is rarely visited. You can have just as good a day up there, then some of the more popular areas!

Just hope the publicity for "this is a quiet place to go" doesn't backfire ;-) Though I feared it would when UKH published their article on quiet places to go when lockdown was eased, and was proved wrong.

Some places are destined to always be at the esoteric end of the spectrum, irrespective of how many articles are written about them.

It'll be a strange day indeed when Great Calva has as many people on it as Scafell Pike, that's for sure :-)

A lovely bit of the Lakes. I had a great day just after Christmas a few years ago doing something like this: https://www.walkingenglishman.com/ldp/oldcrownround.html

Followed by a couple of excellent pints in the Old Crown.