Two weekends ago the huge OutDoor Trade show descended upon the town of Friedrichshafen in Germany. This is the event of the year for European climbing companies, and there are literally hundreds of brands showing off their shiny new stuff.

We have a series of reports coming up on UKC, and this is always one of the favourites - climbing hardware. This is the stuff that you shove in the rock, it catches you when you fall, and it's 100% climbing. You can't get far without a decent rack of climbing gear, and we are always keen to see what is new or hot on the hardware scene.

Note: We've included prices where possible, but not all prices are available at this time.

The basis of any rack of gear is carabiners or quickdraws, and in this department we have:

These are Mammut's sport and general quickdraws for the coming season. Available with either solid or wire gates at the rope end, and solid gates at the bolt end, they have a wide, easy to grip sown small sling with a rubber cap at the end to hold the rope. Nothing revolutionary here, but nice looking draws all the same.

All new from Wild Country is the Proton. These sport-specific carabiners are built for smooth clipping, with a grip-friendly shape and deep internal angles that are designed to help keep both rope and bolt just where you want them. They have have hot-forged solid gates with a keylock nose; note the particularly sharp rope-eating angle on the bent gate. The carabiners are shaped to accommodate Wild Country's variable width webbing, and come individually or as quickdraws of three different lengths: 12cm (£19); 17cm (£19.50) and 25cm (£20).

This carabiner is perhaps the most whacky thing we saw in terms of new hardware. The gate of the carabiner opens both ways, and keeps the non opening end captive. For instance if you have clipped this carabiner to a belay bolt, and you want to clip your rope in or out of the carabiner, it never becomes unclipped from the belay bolt. With a surprisingly slick gate action, this obviously specialist piece is actually quite usable.

Equally as fundamental to many climbers are the bits you stick in the rock - nuts and cams:

Here we have a couple of different things, and we'll kick off with a video of Bill Belcourt at Black Diamond.

Bill shows us the new Camalot X4 offset cams, as well as some funky updates on the carabiner front. Check these sexy little beasts out!

Brand new from Metolius is this TINY cam. It's not quite ready for production, so we don't have loads of details right now, but here you can see it compared to an iPhone, and to the previous smallest Metolius microcam. What is interesting about this cam is that, although there have been some similar size units available before, this is fully rated to hold falls, whereas previously cams this small have been for 'aid climbing' - although everyone has used them for trad anyway! Tiny and strong - we like.

Come winter time and you can have as many carabiners as you like, but they are not going to stick in the ice. Here's some stuff that will:

Summer or winter, you still need something to tie into - a harness, so we had a look at a range of new stuff in this department:

Mammut have a range of new harnesses coming out, including the all round Ophira harness. This simple looking harness features fixed but stretchy fit leg loops, a plastic reinforced loop connecting the legs to the belay loop, a simple buckle and four ample gear loops.

In this video from Black Diamond, Nathan Kuder takes us through the Spring 2014 new harnesses, the Ozone and Aura.

We spoke directly to Anja Kaiserswerth who has designed the new range of women's harnesses at Edelrid. Here she tells us about the Solaris, which is out in Spring 2014 and will retail at £85.

If you want to get ahead, get a hat. In this case one that protects your head when climbing. A helmet!

Spring 2014 sees two new helmets from Wild Country. First there's the Focus, marrying EPS foam with a durable polycarbonate shell to offer great all-round protection at a fairly minimal 230g in weight and a price tag of £80. It comes in one size, 56-63cm, and adjusting it is smooth and easy via a 'quick click' dial at the rear which can be twiddled one-handed or even, say Wild Country, wearing gloves. The snazzy magnetic chin buckle is also made for one-handed or gloved use. There's plenty of side venting and a removable/washable lining.

Complementing this is the Fusion. With a more substantial polypropylene outer and rather less of the EPS foam inside this looks at first glance like a fairly conventional hard shell helmet. But here the foam inner is separate from the outer and connected to it via joints rather than being glued - an arrangement which Wild Country say will make the Fusion less prone to damage. This might be welcome for Alpine, expedition or winter climbing perhaps, especially given its little integral brim for extra face protection. The Fusion also boasts a removable/washable lining, and comes in two sizes: 48-56cm (332g) and 53-60cm (370g). It's pretty affordable at £55.

And when you're not using ropes, you might want a nice soft crash pad to land on - we checked some out:

Here Steve Roberts takes us through the new simply named 'Crash Pad' from Grivel which is available in September 2013 and comes with an option to buy a cool mat cover to keep the mat clean and dry or protect the inside of your car. The mat is £99.99 without or £119.99 with the crash cover (called the crash and carry package) or the crash cover can be bought individually for £29.99. The yellow crash cover is just on the left in the video.

We have seen air-filled crash pads before (see this UKC review) but now there is a new one from Wild Country, and the main difference from our point of view is that the old Ronin pad was really heavy, whilst the Airstrike from Wild Country is around 25% lighter than a normal pad! In the following video Richie Patterson takes us through the key features, and James Pearson takes a jump from the top of the stand to show that it actually works...

One of the original bouldering mat manufacturers, American brand Metolius have a nice looking new pad for the next season - the Session. No bells and whistles, but a well thought and and classic design, with some hard wearing materials are the key points here. Chip from Metolius introduces the pad in this video:

Last but not least is some chalk bags. We all use them, and they are pretty simple, so what's new this year in chalk bags?

These lightweight fast drying chalk bags are perfect for shaving a few grams off before a redpoint, or just for deep water soloing. The linier is thin and light, the outer is fast drying, and they come in a huge range of funky designs. Nice.

Selling at £15, coming out in spring 2014, the Aperture chalk bag from Arc'teryx is introduced on this video by Jon Rockfeller:

This video is blocked because you have disabled Statistics cookies
Please enable them to view the content
UKH Articles and Gear Reviews by UKC/UKH Trade Show Reports
More Articles
Share: 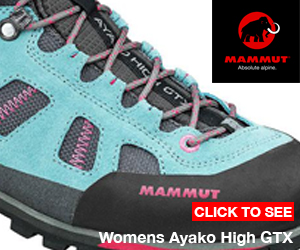 We spent the start of the month catching up with brands at the big winter gearfest: ISPO. Despite the fact the show was quieter than usual, this in no way detracted from the quality of the clobber on show and hitting the shops in the near future. Below is a...

We spent earlier this week catching up with brands at the big winter gearfest: ISPO. Despite the fact the show was quieter than usual, this in no way detracted from the quality of the clobber on show and hitting the shops in the near future. Below is a...