Share
Reviewed by Rob Greenwood UKC 9th July, 2021
This has been read 10,920 times
Price: £225Brands: Rab
Share
We receive free products for review from brands, many of whom advertise on the site. We work on strict condition of editorial independence, and no guarantee of endorsement

The first generation Kinetic Alpine really felt like something special, with its soft, stretchy, and highly breathable fabric. On first glance it'd be easy to have mistaken it as a softshell, but it's very much a hardshell (albeit at the soft end of the hardshell spectrum). All of these factors made it a very wearable jacket. Whilst it was designed with the alpine environment in mind, to say this is exclusively what it's for would have been vastly underselling what was fundamentally an extremely versatile jacket. I've used the original walking, climbing, running and mountain biking, it's been absolutely great for them all.

Given how enamoured we were with the original, how does the Kinetic Alpine 2.0 fare in comparison?

The biggest difference is the fabric, which has been beefed up significantly across high wear areas. Where previously Rab had used a ceramic print to add to the levels of durability, this time around they've addressed the matter of abrasion resistance by moving from a knit to a woven material in high wear areas.

What difference does that make in real terms? The first thing you'll notice is its feel, as it's not quite as soft; however, the purpose of this is to increase the durability, which it definitely does (significantly more so than the ceramic print did, too). It also has the added benefit of increasing the level of waterproofing, which is particularly useful across the hood and shoulders. Were there to be a drawback it's that there is, as a result of these benefits, a knock-on effect to the levels of breathability, but it's worth remembering that this is still an extremely breathable jacket.

Read more
The Pants have received a similar, albeit more substantial treatment, with the amount of weave fabric vastly outweighing the knit. In fact, the front is almost entirely weave, which is amazing from a durability perspective. Where the previous version felt like a stretchy walking pant which happened to be waterproof, this feels like a proper shell, albeit with the benefits of added stretch and breathability.

These updates will be of most interest to those who are interested in more technical use in the Alps, or those scrambling and climbing, where the benefits of the high wear areas will be best felt. If you used your original Kinetic Alpine for walking, running and mountain biking there's a distinct chance that the Kinetic Alpine 2.0 will feel like overkill, as it's a little less soft and breathable, which were what I liked so much about the original. If this sounds like you, it would be worth checking out the Kinetic 2.0 Jacket and Pants, which consist entirely of the Proflex Knit fabric.

Men's - Rob: Part of the brilliance of the original Kinetic Alpine was its fit, which was absolutely spot on. Part of this came down to the cut and part of it came down to the fabric itself, which was - due to its stretchy nature - very forgiving in terms of its freedom of movement. The Kinetic Alpine 2.0 Jacket's weave fabric doesn't quite offer the same level of stretch, so Rab have adjusted the fit accordingly, making it a little longer in the arms, adding a bit more width to both the arms and body, and giving it a higher volume helmet compatible hood.

Women's - Penny: Whilst I have worn the original Kinetic Alpine, the one I wore belonged to Rob - and was a men's medium - hence I haven't got quite the same reference point and will therefore focus entirely on the Kinetic Alpine 2.0. The initial impression wasn't necessarily to do with the fit, more the sizing, which comes up quite small. I'm pretty reliably a size 10 and in the Kinetic Alpine 2.0 this felt pretty snug - even over thin layers. If you were to wear it over multiple layers - or find out you are pregnant mid way through reviewing it, as I did - then you'd definitely want to size up.

Men's: Much like the Jacket, the Kinetic Alpine 2.0 Pants differ from the original, with a general broadening of the fit, particularly in the thighs. Aside from the cut, the first thing you'll notice whilst trying them on is the waistband. Whereas the original featured a simple elasticated waist, the update has a far more substantial waistband featuring a zipper and fly.

Women's:  The fit of the pants is similar to the jacket, insofar as they're both similarly small for their size.

In an age of lightweight kit an increased weight is often considered a negative thing, but in the case of the Kinetic Alpine 2.0's weight gain it's worth re-iterating that this is a very different product to the original and as such it is very difficult to compare.

Each extra gram equates to a greater level of durability and abrasion resistance, but if you don't need that in abundance then maybe the Kinetic Jacket and Pants (note: Kinetic - not Kinetic Alpine) would better suit your needs.

The most noticeable change to the jacket is its hood, which is now helmet compatible. On the previous model this would have been out of keeping with its slimline fit, but now that the fit has been updated, along with the materials, an over-helmet hood is the natural choice. The peak features a bit of reinforcement so that it stays in place, but it isn't what I'd describe as fully wired. This is most evident on wet and windy days when you'd most likely be wearing something bigger and more burly. Volume can be adjusted in two different ways, around the front and the crown, which is good news for those that aren't planning to wear a helmet - or who are, but are also planning to take it off at some point.

The main change to the pants, outside of the changes to fit and fabric, is in the waistband. Where previously it was elasticated, it now features a double press stud button, which allows you to fully open them with the fly, making them much easier to get on and off (and - if you're a man - have a wee in). It's also stripped back on the amount of elastication, instead providing a strap/buckle system through which to adjust the fit.

Much like the other features, whether or not you'll like this largely comes down to what you're intending to use them for.

The Kinetic Alpine 2.0 is definitely a very different product to the original, being a huge step up in terms of where it sits within the range (and on the mountain), and whether or not this is a good or bad thing largely comes down to what you intend to use it for. If it's climbing, scrambling or mountaineering then it is a very definite improvement due to its increased durability; if it's for walking, running or mountain biking then it's potentially less suitable than it once was, but for those people (myself included) there's always the Kinetic Jacket to fall back on. 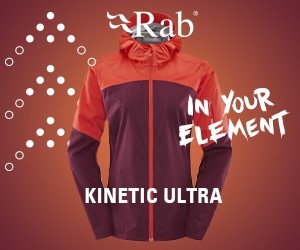 While the Alpine Resolve is Montane's current top of the range shell for alpine climbing and winter mountaineering, it wouldn't be overkill for foul weather hillwalking too. It's not cheap, but compared to some of the competition it represents really good value, says...

Now available in a women's version, the Grim is a rugged mountaineering shell intended for general mountain use, from skiing, to climbing, to walking, to sliding down Glas Maol on your belly like an excitable penguin. Fliss Freeborn road tests it in suitably grim...

Protective enough to cope with harsh weather, yet sufficiently light and breathable to be comfy when running, Montane's Spine Jacket - named after the brutal ultra race along the Pennine Way - strikes a really difficult balance, making this a great shell for running....

Existing on the hazy boundary between fully waterproof and merely very water-resistant, and blurring the windproof/softshell/hard shell divide, the Skaftafell baffles binary thinking, says Toby Archer. It's unsettling. But in the real, wet and windy world, does it...

While the Alpine Resolve is Montane's current top of the range shell for alpine climbing and winter mountaineering, it wouldn't be overkill for foul weather hillwalking too. It's not cheap, but compared to some of the competition it represents ...

Now available in a women's version, the Grim is a rugged mountaineering shell intended for general mountain use, from skiing, to climbing, to walking, to sliding down Glas Maol on your belly like an excitable penguin. Fliss Freeborn road tests it in suitably grim...

Protective enough to cope with harsh weather, yet sufficiently light and breathable to be comfy when running, Montane's Spine Jacket - named after the brutal ultra race along the Pennine Way - strikes a really difficult balance, making this a great shell for running....

Existing on the hazy boundary between fully waterproof and merely very water-resistant, and blurring the windproof/softshell/hard...

Can you pick up a decent shell for only around £200? We think so! While top-end technical waterproof jackets cost big money,...

A Gore-Tex Active shell with a climbing-oriented cut and feature set, the Mitre Peak is a...

Dan Bailey sets aside his gaiter-scepticism to try out three models from Trekmates' extensive range. They all do a decent...