Nikwax Tech Wash is made to clean and revitalise waterproof fabrics, and TX Direct restores their DWR finish. Basefresh, meanwhile, is designed to banish the odour of synthetic base layers without compromising performance. We gave all three products a rigorous workout on the oldest jacket and smelliest tops in the gear cupboard.

Washing and re-proofing outdoor clothing is not the most exciting topic, so I decided to have a bit of fun with it. I took the oldest Gore-Tex jacket in my cupboard, a heavy shell of ancient vintage. This has seen well over a decade of action, and though its mountain days are long behind it the fact that it has been relegated for several years to a life of gardening in the rain and occasional sea kayaking trips has left it filthy with mud, grease and sea salt. What better candidate for the Nikwax treatment? Was its next stop inevitably going to be the knacker's yard, or might washing it with Tech Wash and then re-proofing with TX Direct breathe a little life into this old workhorse?

First up, the wash. Nikwax Tech Wash is basically a liquid soap designed to gently clean waterproof textiles such as Gore-Tex and eVENT without damaging them like a detergent might. By removing surface dirt and grease it allows the fabric to breathe again as intended, reckon Nikwax, and helps revitalise any water repellent (DWR) finish. The liquid can be used either in a washing machine or a hand wash. With a newer jacket I'd probably play it safe and do it by hand, but I didn't think there was much to lose by machine washing in this case. The only precaution I took was to clean out the residue from the detergent tray in the washing machine, as recommended by Nikwax, before sticking the jacket on a cold cycle with a couple of capfuls of Tech Wash. Detergent is not so good for waterproofs.

I've used Tech Wash for years and always found it pretty effective at revamping grubby garments with a tendency to wet out. ​Given the filth it had to deal with in this case the results were pretty good: nothing would shift the really ingrained staining, but the jacket certainly looked a lot fresher after its wash.

The original DWR treatment gave up many years ago, and even when it's clean the museum piece jacket now 'wets out' at the first hint of rain. As a result its breathability is compromised, and in prolonged showers it feels a bit like wearing a clammy wet sponge. Attempting to re-proof this old thing would be a tough test for TX Direct.

This is another water-based product that's designed to be washed-in either by hand or by machine. It has, say Nikwax, been "specifically designed and optimised for breathable waterproof garments; it leaves a flexible water repellent treatment on individual fibres allowing moisture vapour to pass through, maintaining breathability."

In order to get the best impression of its performance before and after treatment I re-proofed only half of the jacket (by hand in the sink), leaving the rest untreated. It's the sort of experiment you'd only do with a garment you no longer loved. For the record, if you're handwashing then wear gloves; I didn't, and this stuff is hard to wash off skin! TX Direct may not be cheap, at £8.25 for 300ml, but as you only need a couple of capfuls per garment you'll get several treatments out of a bottle.

Having done the re-proof, for maximum authenticity I should arguably have taken the jacket out for a long miserable hill walk in the drizzle; but this genuinely seems one of those rare occasions when a test in the back garden should achieve a clearer result. So in lieu of a real life rain storm I gave it a thorough drenching with a hosepipe.

The picture speaks for itself: On the untreated side (left) the surface of the fabric is still visibly wetting out. It may be cleaner than it started out, but it seems no less absorbent. However on the side treated with TX Direct the water is beading into droplets fairly readily, and most of it is running off rather than being soaked up. There's no chance that re-treating could restore this fabric to as-new condition, and I don't imagine the revitalised water repellency is likely to last that long; but bearing in mind the prior state of the jacket the result is still pretty impressive.

I don't think there's any doubt that regularly washing and re-treating your waterproof shells with Tech Wash and TX Direct is going to keep them performing effectively for longer.

This video from Nikwax gives a useful summary of all the above:

Whilst the reign of the 'smelly helly' may well be over, there is more nowadays to washing baselayers than getting rid of the smell - there's taking care of their performance too.

As a back story to Basefresh it is worth being aware that there's a significant drawback to washing baselayers in standard detergent:

A detergent will wash a base layer very aggressively, which gets rid of the smell (great) but also a lot of its performance (less great). The agents used within detergents mean that baselayers can wet out faster and absorb more water, which is clearly detrimental to their ability to wick away moisture. One easy and non-scientific way of testing this is simply to wash one base layer in detergent, then wash another with a dedicated product such as those made by Nikwax. By the time the spin cycle has finished the former will still be wet, while the latter will be practically dry.

When winter climbing I would be quite religious about the proper treatment of my baselayers, as a wet baselayer is a pretty miserable thing. Washing that baselayer with a dedicated non-detergent product makes a noticable difference.

For this you might use Nikwax Basewash (not to be confused with Basefresh - easily done!), but it comes with a bit of a drawback - namely that garments have to be washed separately from your standard washing pile. For most of us that's a bit of a faff.

Enter Basefresh, a deodorising conditioner that boosts the wicking properteies of base layers and helps inhibit the buildup of new smells. This is a compromise between exclusively using detergent and using a more specialist product such as Basewash, which is designed to be used on its own. It couldn't be easier: just load up the machine with a bunch of laundry, including your offending base layer. Add a perfectly standard detergent to the tray, and then in addition pop a measure of Basefresh into the conditioner drawer. As well as deodorising your garment, Basefresh counteracts the detergent's effects on the fabric's ability to shift moisture.

These vids show a highly scientific home experiment: a base layer washed in standard detergent versus one washed in Basefresh. While you won't be putting out quite as much sweat as this (hopefully), we think the difference in water absorbtion is quite telling, and translates into a difference in wicking performance that you can really feel:

Baselayer performance after being washed with detergent from UKClimbing.com TV on Vimeo.

BaseFresh from UKClimbing.com TV on Vimeo.

Since you don't have to separate baselayers and other technical products from your usual washing pile we find Basefresh a pretty convenient option. And in our eyes (or noses) it clearly works, banishing the smell without noticeably affecting performance. 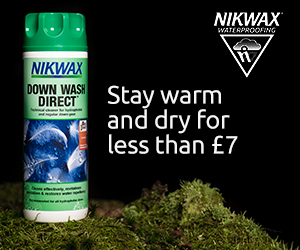 Clean and restore all of your outdoor footwear with Nikwax

Your outdoor boots and shoes go through the mill, particularly when you wear them in the mud and rain. Over time, you may notice them starting to soak in water, or any leather on them starting to stiffen. That's because once...

Getting wet on the inside when you're outside?

Forgotten the last time you actually stayed dry inside that expensive hard shell that you bought not so very long ago? Remember when water used to bead on the outside of your jacket instead of seeping into your clothes beneath? Found...

Nikwax celebrates many first, delivering "much more than just waterproofing

In 2017, Nikwax marks its first 40 years in the outdoor industry. Established in 1977 by Nick Brown, the first Nikwax commercial product, Waterproofing Wax for Leather, was produced in his North London flat....

Is your down jacket getting wet and leaving you cold?

Ever gone out wearing your favourite down jacket, got caught in the rain and ended up feeling wet and cold? Maybe you thought your jacket was water-repellent or perhaps you were hoping for good weather. Whatever the reason, no one...

The Potato
22 Apr, 2016
all well and good but here are my experiences in real life - Tech wash - very good and I use this regularly for all my outdoor / running / cycling /waterproof clothing Down proof - clogged up my micro down meaning I had to get it cleaned professionally costing £50, wont be using again Wash in direct / spray on - works for about 2 uses, not very effective Base fresh - works ok but not worth the cost, pure soap is fine
Guy Hurst
22 Apr, 2016
Tech Wash is pretty effective, but expensive for what it is. Dri-Pak Liquid Soap Flakes does the same job but costs less than half the price; or you can dissolve dry soap flakes (not detergent) in hot water and use it in the same way. These products are a bit hard to get hold of, but not impossible. I think Waitrose sell the liquid soap, and a few shops still stock the dry flakes. Also, detergent doesn't destroy DWR, it masks it. To get an old waterproof really clean, you can wash it in detergent, clean out your washing machine and then wash the garment again in Dri-Pak to remove the detergent residue.
climbwhenready
22 Apr, 2016
I have a very different experience of TX direct you; I find it lasts for at least a couple of months (of course on modern fabrics that "take" DWR) before needing refreshing.
GarethSL
25 Apr, 2016
The article forgets to mention/do(?) the essential tumble drying step when re-proofing clothing. Can also recommend ironing (on low-med temp) seams to keep the tape adhered and prevent bubbling.
alimckay
25 Apr, 2016
Nikwax doesn't need heat treatment.
Add Comment
Facebook Twitter Email LinkedIn Pinterest