The Petzl Ange: a new type of karabiner Review

Share
Reviewed by Michael Ryan 19th April, 2010
This has been read 31,001 times
Price: £9.50 - £22.00Brands: Petzl
Share
We receive free products for review from brands, many of whom advertise on the site. We work on strict condition of editorial independence, and no guarantee of endorsement

Petzl introduced the hot forged Spirit karabiner and quickdraw combo, the Petzl Spirit Express in 1992 (a year after introducing the GriGri) and it soon established itself as a classic design; a favourite amongst climbers, especially for sport climbing. The Spirit has a wide gate opening, 20 mm, a smooth action, is easy to clip with its fumble-free grooved gate, and again for the time combined great strength, 23 kN with reasonable weight, 49 g. For gate closure it has a secure non-snag recessed 'keylock' system; a blob, rather than a hook, which sat in a recess in the gate.

It also looked the part.

A New Clip On The Block: The Petzl Ange

Bottom line is that you pay for what you get, all karabiners must have a CE mark, but if you are paying bottom dollar for cheap karabiners you could be putting yourself at risk.

Petzl haven't changed the design of their flagship karabiner/quickdraw since 1992 but are now set to make climbers eyes open wide with the introduction this September of new model to compliment the Spirit, called the Ange. We haven't had chance to use the Petzl Ange yet but here is what we found out about it.

Your normal solid gate karabiner has a spring, called a internal gate rebound spring, at the pivot end of the gate which provides tension when opening the gate - to put your rope in - and then springs the gate back shut. With a wire gate, a folded piece of wire is twisted and the wire gate is the spring. The wire then usually rests in a notch to give that all important strength. Wire gate karabiners are usually lighter than a solid gate, don't suffer the same gate freeze problems whilst winter climbing, often have a wider gate opening, and some people just simply prefer the gate action.

Not All Wire Gates Are Created Equal

The downside of wire gates is that the springiness can reduce over time, some low quality wire gate karabiners can start to stick, lose their springiness or otherwise not perform.

Solid gates karabiners can easily have double the life of a poor wire gate and more, before they get loose. There's also the important fact that all wire gates are not created equal - it depends on the quality of the wire gate maker and the design of the wire gate. Some budget karabiners are notorious for having poor quality wire gates that not only lose springiness but in some cases fail to close properly, I have witnessed that on two brands and it's serious. If a gate fails to close and a fall occurs, the result could be fatal. This is not the case with quality brands like DMM who have locally produced wire gates and have tested them up to 50,000 cycles, yes they have a machine that opens and closes gates, with no deterioration in the tension or springiness of the gate. These figures are actually academic as most of us will snap open and close our karabiners considerable less. Importantly quality brands like DMM and Petzl have rigorous quality control before their products leave the factory.

Bottom line is that you pay for what you get, all karabiners must have a CE mark, but that is not the whole story. If you are paying bottom dollar for cheap karabiners, there's a reason and you could be putting yourself at risk.

Either way essential in a karabiner is a sprung gate.

Back To The Petzl Ange

The Petzl Ange has a single post made out of stainless steel for the gate and an internal spring at the pivot. So you get the weight savings, and some may argue ease of opening of a wire gate but the durability of a solid gate.

Because of the single stainless steel post of the gate, its diameter is smaller than that of a wire gate or normal solid gate, you get greater gate opening, more so as the post is slightly offset from the axis of rotation increasing that space even more for your rope.

Solid gates are also more prone to gate flutter (accidental opening) than wire gates. If you are unlucky during a fall when the rope comes tight on the karabiner's rope groove, that flutter could mean that as the force (you) is applied on the karabiner the gate could be open. The Ange gate has the low volume and low mass of a wire gate so it could be inferred that gate flutter will be reduced compared to solid gates.

There is a black sleeve at the sprung end of the gate, this orientates the load along the major axis and acts as a grip which can be used to open the gate.

The action of the single post gate is very smooth.

Like the Spirit the Ange has a non-snag recessed 'keylock' system but this reversed, the self-cleaning recess is the nose of the karabiner and a small blob at the end of the gate sits in the recess when closed. The nose profile is very clean which reduces snagging.

The Ange is cold-forged, machined and finished in Petzl's HQ in Crolles, France. It is constructed out of six parts.

The Petzl Ange comes in two sizes, Small and Large.

Typically a leader falls generate between 3kN and 7kN

The gate opening for the small Ange is 23mm, the same as C.A.M.P's Nano 23 with which it shares many characteristics with, but the Ange is slightly larger than the Nano.

The small Petzl Ange will retail at SRP £9.50, the large Ange at SRP £10.00. The Ange will also be available as quickdraw sets too, using the strongest man-made fibre in the world 100% Dyneema (no nylon). Pure Dyneema is only available in white and is usually combined with coloured nylon fibres.

So what have we got here? These are comparatively light carabiners with wide gate openings, a clean nose and a smooth action for ease of clipping. A good combination of lightness, strength, size and functionality. The Petzl Ange is available from September and it will be interesting to see what climbers make of them. 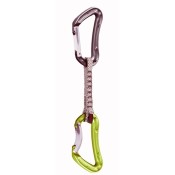 We've always wanted to do our own proper climbing gear, who wouldn't?So we approached DMM to bash out a limited number of quickdraws for us to show we are serious about making serious gear. And here they are: Alpkit McGraw's. Fully spec'd DMM Prowires and dyneema...

Hardonicus
19 Apr, 2010
I'm not sure what this product is bringing to the table. It claims to solve the spring tension issue of cheap wiregates? Why not buy a good wirgate? It is not particularly light compared to the lightest wiregates. I fail to see how the gate opening can be any more than a wiregate, surely it must be less, as it is limited by the diameter of the 'blob' on the top.
Keendan
19 Apr, 2010
That's very different, havn't seen anything like it. Small 28g 20KN Large 34g 23KN So it's still heavier than the Phantom and CAMP Nano, as well as not being as strong as the Phantom. Looks good though, who's going to buy one?
LastBoyScout
19 Apr, 2010
Shouldn't that be: Looks good, though who's going to buy one?
Beaker
19 Apr, 2010
Helps if you know some context... Petzl have never done a wiregate before because they refused to put a hook nose on a biner, as is required by a normal wiregate. By using the "post" design rather than the "paper-clip", they get the advantages of keylock design but with a lighter weight gate.
beardy mike
19 Apr, 2010
DMM Shield? It's only been out for near on a decade...
More Comments
Add Comment
Please support the following outdoor retailers who support UKHillwalking.com: