Share
Reviewed by Kenton Cool 22nd September, 2008
This has been read 15,338 times
Price: £40-£43 (Power Cams) £55 (Super Cam)Brands: Metolius
Share
We receive free products for review from brands, many of whom advertise on the site. We work on strict condition of editorial independence, and no guarantee of endorsement
Peering into the box that the postman had just dropped off I was amazed to see a sea of hard-wear. The box was jammed full of the new Metolius cams and nuts for testing. It was towards the end of my winter in the Alps but I still had a few weeks worth of guiding to go, a perfect time to test...

The first time I can remember using a Metolius cam was back in 2001 in the States. We wanted to climb Moonlight Buttress in Zion and the topo repeatedly mentioned blue, yellow and orange TCU's, we only had a single blue Metolius one. It proved so useful that we repeatedly back-cleaned to have this gem of a piece on our harness as much as possible. It really was a true lifesaver. I therefore had big hopes for these new cams that I had on hand and they didn't disappoint.

At first sight the Metolius Ultralight Powercams look to be well made with a beautiful finish. The ones I had on test were mainly the four cam units but I also had a couple of the 3 cam version (very similar to the one that we had in 2001) and also one of the funky Supercams with a HUGE range (see review further down the page). All the cams are twin stemmed with a reasonably long, narrow (13mm Dyneena) coloured tape (each cam has a different colour for ease of recognition) which is captive on the cam.

My Chamonix apartment was full of dossers at the time the box of test-kit arrived and the cams quickly made their way round the table. Climbers are, I sometimes think, a unique breed, they are always looking for innovation but then when it comes no one is more scornful. “Seem heavy”, “don't like the twin stem”, “what's this string cable thing” “colours are all different” were just a few of the initial comments, but the proof would be in the pudding and in this case the dessert would be served in the form of ice choked granite cracks in Chamonix, shattered limestone of Switzerland and the quartzite of Gogarth.

The cams are slightly different sizes to what many of us are used to, my older DMM and Wild Country cams are the same sizes but these Metolius babies come in slightly different sizes (For instance a size 2 DMM cam has a range of 29 to 44mm compared to a Metolius 5 of 28 to 39.5mm). To start with this upset me as I like standardisation in my rack but it didn't take too long to size up the various coloured tapes in order to slam the cams into the crack first time. To be honest the size difference is almost unnoticeable and with use it makes no difference at all. This difference in camming range comes from the fact that Metolius use a higher cam angle than many other manufactures, meaning reduced range but better holding power and rock contact when placed - in theory making for safer climbing.

As with all Metolius equipment these pieces are built to last, but they are also one of the lightest 4-cam units on the market. This weight saving comes from what Metolius call the Direct Axle Technology or D.A.T. In short it means the units have a narrower head width. They also have a slightly wider cam face then other brands, giving greater surface area contact with the rock and greater holding power. The trigger action is smooth, partly due to the plastic sheaths that allow the metal trigger to run smoothly up and down the stems and the clean finish of the cams themselves. This makes placements that little bit easier, in turn making firing the pitch first time more likely. Once placed the robust feel of the cam inspires confidence, and that's something you don't get from all the lightweight cams on the market (especially some of the European brands). All the sizes come with the (now) customary machined cam stops which prevents inversion and means they can be used as passive protection if need be.

The first outing for the new rack was a 5 pitch mixed route in Chamonix with clients. I was concerned at first about the narrow twin stem and how this would work with gloved fingers in winter. I couldn't get my trigger finger between the stems but there is just enough of the trigger either side of the stems to make it usable. I'll admit that the smaller sizes were a bit of a struggle but then this goes with any small cam in winter and the pains of gloved hands. The first test run proved a huge success. I was placing cams more often then I perhaps would have done normally but I was finding that they were seating quickly and solidly in the granite. Now, way-back when I was training to become a guide we were once told not to place cams too often because clients struggle to retrieve them and here I was placing as many brand new cams as possible, surely this was going to end up a disaster! There is nothing a climber hates more than leaving a nut behind let alone a shiny new cam. At each belay I was surprised when a full array of cams was handed back with out any adverse comments or cursing from my client, now that's gotta be a good sign .

The ease of removal seems to come from the fact that the twin stems and lack of float in the trigger means that the cams do-not have a very wide asymmetrical range, That is the sets of cams can't be massively offset. This has advantages and of course disadvantages. On the good side it means that they can't really walk into the crack once placed, thus meaning removal is quick and easy even for a novice climber. This feature was welcomed on the sun-kissed South face of the Aig Du Midi the other week when I was cleaning the cams out with ease as my Everest-weak-arms furiously fought the pump seconding one of the steep pitches.

On the down side, the cams don't seat as well as some others in slightly flared cracks. This design feature perhaps comes from the fact that many cracks in the states (where these puppies are designed and made) are pretty parallel and thus the design doesn't need to allow for those strange flared cracks and pods we encounter at such places like Gogarth.

Another cool little design feature for the novice cam user is the coloured dots on the side of the cams themselves called the range finder. The green, yellow, red colour code lets you see the safe through to dangerous parts of the camming range. This is something the experience climber will scoff at but having seen many accidents with cams ripping out I can't help but think it's a good idea for those starting out. It works very simply, the climber checks which coloured dots are in contact with the rock, if its green then all is good, through yellow to the red range, at which point beware as its at its limits of safety.

Fellow Mountain Guide Owen Samuel said after a day's cragging on the granite of Chamonix “Well they preformed better than I thought they would!” and Dave Hollinger said that the colours were pretty (which has to be a bonus surely?) but still couldn't get the purple one in his mouth... In short I think the best way to sum this review up is just to say that I now carry these Metolius cams on my harness whether I'm working or playing, cragging or mountaineering and to add that my wee blue TCU from all those years ago no longer lacks Metolius play partners.

Solid, well designed, well made cams. Slightly different sizes than other brands, but certainly as good. Thumbs up.

The most interesting of all the units on test was the Supercam. This is a clever little design that uses two sets of different sized cams, and a small length of Kevlar cord. The result of all this is an unbelievably massive camming range.

When one pulls the trigger the bigger set of cams move so far round that its impossible to believe that they won't invert, while the smaller cams move within the bigger cams arc or movement. Inversion doesn't occur and as a result they have the biggest camming range of almost any cam on the market, the one I had had a whopping 40mm of range!! This all comes with very little increase in weight. (I also found it made a great anti-stress device for those long office days; as the trigger action is deeply satisfying due to the cord, range of movement and general feel).

The only downside to this funky addition to the cam world is that even with the bigger range many of us still prefer to carry extra cams, yes it may have the range of 2 normal units but would we really carry just 2 of these new cams to the old 4. Lets face it unless we back clean we can only place it once, I for one normally go for the quantity option, although I can see a use on those shorter routes on Gritstone where we're not sure if that break is size 2 or 2.5.

Well made and an excellent design. A great 'panic piece' but won't replace the standard rack of cams. Could work well on short single pitch routes such as Gritstone.

DMM International Recall on the Dragon Camming Device in size 6 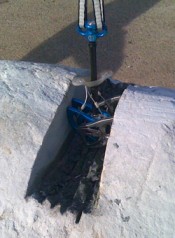 There is nothing like seeing theory in practice to fully appreciate the facts and figures behind how well a product works. DMM's Technical Director, Fred Hall, had the idea of cutting a parallel sided slot out of a 1.38 tonne boulder, placing a...

DMM Torque Nuts are protection devices based on the hexcentric theme. But do they have a place in the current market? Toby Archer gets talking about Torques... 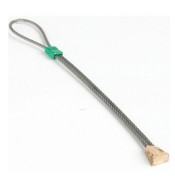 The HB Brass Offsets, offset micro wires developed a fanatical following and after re-introducing the larger alloy Offsets 12 months ago we were inundated with requests to start manufacturing the smaller brass offsets. Their popularity is because their unique shape allows...

Hhh
24 Sep, 2008
But are they better than BD camalots?
Add Comment
Please support the following outdoor retailers who support UKHillwalking.com: