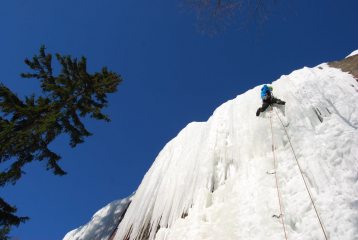 Reviewed by TobyA22nd September, 2009
This has been read 62,672 times
Price: £13 each Brands: DMM
DMM Torque Nuts – evolutionary, not revolutionary improvements to an old design.

British climbers appear to have a rather complex relationship with hexes. For most of us starting out on easy trad climbs, hexes are usually amongst the first bits of gear we purchase and use. Those early adventures are accompanied by the traditional cow-bell clanging of these unpretentious pieces of equipment. They are also somehow reassuring in their chunky nature and straightforward design. There is no worrying about the relative merits of different camming angles or frictional coefficients of alloy on slick limestone. If you can stuff a hex in a crack and pull it down to where it goes tight, it is probably going to work.

But as people progress through the grades and upgrade their rack, the attraction of cams comes in. In parallel cracks or when you are in a desperate rush, cams are just easier to use. They may well be more expensive, heavier, easier to place badly, less easy to tell by looking how good they are and easier to damage – but you can punch a cam into a crack and have it clipped at a speed just not possible with hexes. As a result hexes have become forever connected to a class of climbers ranging from bumbly beginners up to VS punters and hence, are a bit uncool.

Of course this is mainly just snobbery as hexes remain useful in certain conditions even for a climber with a full set of cams. Firstly, when winter climbing they are far more reliable, being usable in icy cracks where cams could be deadly. They are also great for big, technical, multi-pitch adventures. I always take some on Norwegian granite mountain routes – they are great for building belays where bigger gear is needed meaning you can keep all your cams for placing in a hurry when leading. They also save weight over cams if you are picking a lightweight rack for Alpine routes or long, easier UK outings.

Where do Torque Nuts fit in then?

Taking all this into consideration, there is clearly still a spot in the market for hexcentric nuts, but do the DMM Torque Nuts bring something new to that niche? I think they do, although I would say the Torque Nuts are an evolutionary improvement, rather than a revolutionary one. Indeed, Graham Desroy who designed the Torques explained this to me :

"What the Torque Nuts achieve is a combination of curves and pivot points which allow the nut to cam correctly. Also by carefully calculating the relative side angles the expansion range is increased. The result is a nut that not only looks good but maximises the camming expansion - this is especially noticeable in horizontal placements."

(You can also read Graham's thoughts on Silvia Fitzpatrick's blog)

The result is a nut that not only looks good but maximises the camming expansion...

After using them I would say that the double sling (first seen on DMM's cams) is the most obvious step up in design from Wild Country Rockcentrics or the older style CAMP and Black Diamond hexes. It's a very elegant idea and executed perfectly with the 8mm Dyneema webbing. When pulled out into the single loop the sling is approximately the length of a Rockcentric sling but with a 15 cm quickdraw clipped to it. This clearly helps reduce rope drag and climbing (as I do) mainly on a single rope, this is a feature I've been using a lot on the Torque Nuts.

DMM have recently slightly widened the holes through which the tape passes, to make it easier to pull the sling from double to single. The nuts I received had the earlier narrower holes and I can't say I've found it that hard to pull the loop through, but now it should be even easier to deploy the big loop.

The webbing is quite exceptional stuff in its own right and I understand that DMM has invested in new machinery to let them sew it for the first time in the UK. In some tests on the Torque Nuts the Dyneema actually broke the alloy of the nuts rather than breaking itself, when pulled to about 20 KNs. The stuff just seems to be ridiculously strong and I imagine we will see it being used elsewhere in the future. The stitching on the sling is also covered in a protective plastic coat, something I've not seen before, but clearly a way to increase its longevity. Also, the groove along the top of nut, in which the tape loop sits is yet another 'designed-in' way in which the sling is protected from excessive abrasion.

The biggest difference over Rockcentrics is how the relative angles of the various faces of the nut create a big size range for placements. The four Torque Nut sizes cover a slightly wider range than five similarly sized Rockcentrics (see the comparison table above). This reminds me of the old Friends versus Camalots argument: you needed less Camalots to span the same range of crack sizes than Friends, but in that case Friend fans would point out that Friends weighed less than Camalots, so you could carry six for the same weight as five of the heavier units thus giving you more protection. This isn't true with Torques versus Rockcentrics because the former are lighter than the older design along with having a better range. However it is still a fair point that if hexes form the main part of your rack for wider cracks, you might prefer having five Rockcentrics to place on a long pitch rather than just four Torque Nuts, even if the Torques would cover the same width of potential placements.

The Torque Nuts are said to work better over older designs, particularly in horizontal cracks where their ability to cam comes even further into play. I've been looking for such cracks when I've been out climbing with them in recent weeks, but haven't really found myself using placements like this yet. In retrospect I now realise that I have never really placed hexes in horizontal breaks like that before; I guess I've always been lucky enough to have cams that do that job more easily. But as with Tricams, if you climb a lot on rock of a horizontal strata, the Torques could well be worth considering.

Placing the Torques in vertical cracks, both in bottleneck and more parallel placements, is straightforward. They are a pleasure to use and on my first trip out with them I managed to place all four of them in a new route that I climbed that day – a route that is now named Welsh Wizards as a result. My only criticism would be that possibly due to the concave nature of the faces of the nut there is less metal in contact with the rock so they seem a little more sticky than my old Rockcentrics and sometimes need a bit of welly to unseat. Having said that I've not needed a nut key to remove any of them so far.

I think the Torque Nuts will quickly find a very comfortable niche in the current market. I can see winter climbers and alpinists liking them for their light weight, wide range and clever double sling meaning less quickdraws need to be carried. These features also make them suitable additions to the rack of experienced multi-pitch climbers who want a few additional wide crack pieces to complement their cams. They even look technical enough to not spoil that "expert climber" look! Surprisingly, it might be the archetypal hex user, the bumbly who might still see the attraction in a full set of Rockcentrics or BD Hexcentrics over the Torque Nuts. This is purely because if they are to be the mainstay of your rack, seven pieces gives you more options than four. Of course the obvious answer to the avid hex fan who wants all the advantages of the Torque nuts' more modern design but needs more pieces than four, is simply to buy two sets!

You can read Graham Desroy's full thoughts on the Torque Nuts on Silvia Fitzpatrick's excellent and informative blog.

As the name suggests, these cunningly sized and shaped nuts work well in standard placements but also have and efficient camming system. Just four sizes cover a very large size range. The colour coded double dyneema sling is protected on the top by a large countersunk groove and works in a similar fashion to the slings on our cams. This unique refinement makes a racking the units much easier and allows you to climb less encumbered.

If you have experience of this product please feel free to share your views on the linked forum thread.

DMM International Recall on the Dragon Camming Device in size 6

There is nothing like seeing theory in practice to fully appreciate the facts and figures behind how well a product works. DMM's Technical Director, Fred Hall, had the idea of cutting a parallel sided slot out of a 1.38 tonne boulder, placing a...

The HB Brass Offsets, offset micro wires developed a fanatical following and after re-introducing the larger alloy Offsets 12 months ago we were inundated with requests to start manufacturing the smaller brass offsets. Their popularity is because their unique shape allows...

IMP's (Immaculate Marginal Protection) are 'brass' micro wires that have a regular taper. They are the ideal basis for any experienced leader's rack of micro gear.

jesatu
23 Sep, 2009
The mix of the corrent and incorrect use of "less" throughout that article is making the grammar purist in me twitch nervously. What did the word "fewer" ever do to you? ;)
heelhookofglory
23 Sep, 2009
...and your spelling is making me twitch too. ;-)
jesatu
23 Sep, 2009
Just when you really don't want a typo... *sigh*
petellis
23 Sep, 2009
All this talk of camming action in hexes is a new one on me - I can't remember ever placing a hex that was cammed, just stuffed behind constrictions. Maybe the torques really are different though...
TobyA
24 Sep, 2009
Being able to cam is why hexes fit in parallel or near parallel cracks. Even when it a constriction the cam effect sometimes comes into play. But as I note in the review, I also very rarely place cams in horizontal cracks where you need that feature, but then I'm lucky to have a full set of cams. Jesatu - My apologies, it was written in hurry late in the evening after climbing. In my defence I think only two of the incorrect usages are mine, a third was added during the edit. I hope you're an English teacher, because at the comp I went to they never taught such things - but that was 80s education for you. I'm left with having to think what 'sounds right' which isn't always correct. I listen to a lot of American radio and according to the Plain English Campaign the incorrect usage is quite normal in American English - so lets blame NPR and my transatlantic news listening habits. :-)
More Comments
Add Comment