Share
Reviewed by TobyA 18th December, 2008
This has been read 20,433 times
Price: £55.00Brands: Wild Country
Share
We receive free products for review from brands, many of whom advertise on the site. We work on strict condition of editorial independence, and no guarantee of endorsement

The first harness I bought was from a now defunct firm called J-rat. It was an ultra light sports rig made of what looked like seatbelts but was in a bargain bin and all, as skint teenager, I could afford. It was a step up from the Troll climber's belt that my chemistry teacher had given me; I made leg loops for that from an old seatbelt I found in my Dad's garage - don't try that at home kids. After a few years of losing circulation in my legs whilst toproping in the J-rat, I got a Chouinard (BD's predecessor)Alpine Bod. I used it loads despite the home-made racking and regular trapping of... ummm... certain masculine appendages whilst abseiling, until eventually a job in climbing shop allowed me to upgrade to a Petzl Guru in the classic mid 90s orange - still a classic in harness design and the first to use of the excellently designed ziplock buckles allowing the full adjustment with ease.

Of course nothing is perfect and being French it only had four smallish gear loops that never seemed enough. I created a fifth with cord and duct tape, but it did spoil its chic-ness. After six or seven years of hard use I started to look for a replacement and bought one of the previous generation of Wild Country Synchros. A great harness in many ways with, as you would expect from a UK manufacturer, loads of racking space, plentiful padding for my ever stouter frame, and hard wearing. Nevertheless, having got used to the ziplock Petzl buckles, going back to the old style was infuriating, with undone leg loops causing particularly twisted conundrums regularly; never fun at –15 when ice climbing.

So I knew exactly what to look for when the Syncho had done six years of hard use: five big gear racks, ziplock buckles, and supportive leg loops; the Elite Adjustable looked like the rig for the job.

The 2007 Wild Country line of harnesses were noteworthy in one respect, Wild Country began having them manufactured in China. Some other manufacturers have been making harnesses in the far east for sometime, including Black Diamond, but this was a first for a British manufacturer I believe. Perhaps as a result this has allowed Wild Country to put lots of features on the harness whilst not overloading the price. This includes five big gear racks, an accessory loop that would hold a krab in a way that could make it useable as a ice screw rack and, at the back, a webbing haul-line loop that tucks away into a neat little pocket. This works well to clip your trainers into for the walk-off. The sliding buckle that holds the back elastics also looks clever although I have no idea if it actually adds something to the harness' performance. The plentiful but useful features make the Elite Adjustable a solid all-round harness for the UK trad climber.

The Elite's leg loops are not as supportive as on my old Syncro; the Syncro is a burlier harness so that is perhaps to be expected, but the leg loops also compare unfavourably to other more comparable harnesses that I've been using recently. Where I climb we do a lot of new routing and hanging on a rope for an hour or more, scrubbing lichen off of a potential line is good way to find the comfort limits of a harness! If you climb in an area where descents are often by lengthy abseils, or if you hang a lot on a rope for other reasons, perhaps consider a harness with wider or firmer leg loops like the Wild Country Syncro or DMM Renegade.

Weight and other issues:

The lightweight fanatics might also be interested that all those features make the Elite Adjustable around 100 grams or more heavier than similar models from other firms. Perhaps also linked to the far eastern manufacturing is the rubbish, small plastic buckle that should keep the leg loops in the right place on the belay loop. The buckle is the wrong size for the webbing so even when you double back the webbing it slips out again very easily once in use. This is not a load bearing part of harness and can be quickly fixed with duck tape but it is annoying that you need to immediately bodge a fix on a £55 harness. I do wonder if this minor but annoying mistake in the sourcing of components would have been noticed earlier if the manufacturing was still happening in the UK? This is not to say the quality of manufacturing is any lower in the far east, but rather that the geographical distance between designer and manufacturer will possibly mean more of products reaching the shops before these types of niggles are noticed.

Wild Country inform me that they have now remedied this problem, so this should not be an issue on Elites in the shops now.

Sizing is a bit odd; a medium felt a little bit tight around my waist, particularly as I was going to use the harness summer and winter. The large was better but then, despite my cyclist's thighs, the leg loops had to be cinched down as far as they would go to be snug. I can't imagine many people will have my waist size but then bigger thighs, rather I would expect the opposite. Best to try before you buy. The face fabric is an attractive white mesh, but this has a tendency to show abrasion if you indulge your deviant tendencies in squeeze chimneys and other dark clefts. Otherwise the harness seems hardwearing.

Wild Country have cleverly incorporated an indicator in the high wear areas around the belay loop. This might have once been dismissed as good way to get people to replace their rig more often, but since Todd Skinner's death I suspect many might be less cynical.

So overall? I would prefer the leg loops to be more supportive and wish the issue with the wrong sized little buckle had been caught earlier, but appreciate the comfy waist belt and loads of useful features on it. The Elite Adjustable is a fine harness for the all-round climber who does a bit of everything.

Since most climbers do a bit of everything, there's a lot to be said for a harness that does too. Over spring and summer 2016 the UKC test team has put ten all-round harnesses through their paces.

The Jay II and Jayne are two climbing harnesses from the German gear manufacturer Edelrid – The Jay is designed for men and the Jayne for women. UKC Gear Reviewer Mark Glaister puts them through their paces... 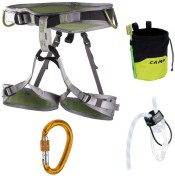 A versatile and affordable kit for indoor and outdoor climbers. The light and comfortable Flint harness features the patented No-Twist belay loop that holds the belay carabiner securely in place to prevent the dangers of cross loading, robust construction, and all the features to make...