Share
Reviewed by Rob Greenwood UKC 26th March, 2021
This has been read 3,944 times
Price: £49.99Brands: Ben's & AfterBite
Share
We receive free products for review from brands, many of whom advertise on the site. We work on strict condition of editorial independence, and no guarantee of endorsement

I am a lover of hot drinks. Summer or winter, I'll tend to carry one whether I'm walking or climbing. Whilst it might be a luxury, it's one that I've always found easy to justify because tea is a spiritual necessity. As a result, I seem to have acquired a fair few thermal cups, bottles and flasks over the years, all of which vary in their features. The MultiBev is a little different, combining a traditional flask and cup concept with a more modern, sleek (and smaller) style of bottle. The question is: does this model marry the best of both worlds, or is it bascially a cool piece of design that ultimately lacks a compelling benefit?

The MultiBev is a 500ml stainless steel thermos flask/bottle, which can keep your brew warm for up to 14hrs (or if you like it cold, it can do this for up to 20hrs). Where the MultiBev differs is in its inclusion of a 350ml cup that neatly (and almost unnoticeably) screws into the base of the bottle. The cup can keep things warm for up to 3hrs (and cold for up to 6hrs) and has a lid which can be stored safely within a compartment in the lid of the main bottle. Both are constructed out of stainless steel, and extremely well made, but - as a result of this and the complexity of its design - the MultiBev comes at a cost of £49.99.

Whilst I've never been opposed to paying for quality (and this is a quality product), the price will be a potential stumbling block for some people. There's another elephant in the room and that is the small issue of whether there is actually a benefit to combining both a bottle and a cup within a single, relatively compact unit.

To put this into context, if I wanted to share my 500ml of tea with my partner then we'd only get 250ml each, which - let's face it - isn't much. If we wanted to share (and I'm not against sharing) then I'd realistically want something larger, around the 750ml to 1 litre mark, so that there's actually something to split between the two of us.

If I didn't intend to share, and just wanted to drink my own drink, then why would I want an integrated cup rather than just sipping direct from the flask? This is the question I found very hard to answer and the only possible reason I could think of was if you wanted a bottle to take outdoors, then a cup to use in the car, or in more urban environments. This sort of makes sense, but it still leaves the question hanging - why combine the two? It adds weight, increases complexity and - as a result - raises the price.

Whilst the MultiBev is an incredibly well made product and beautifully engineered, I am yet to be convinced that there's a benefit of combining both a small bottle and a cup. If it was larger, and there was actually enough liquid to share - maybe (and for what it's worth, there is a 650ml version available at £54.99); but as things stand it just seems to sit in an awkward area where it's both heavier and more expensive than separates, and has a mug that may as well be permanently removed for all the use it is.

MultiBev™ is a 2-in-1 vessel that serves both as a water bottle with a detachable travel cup. Use for coffee in the morning, water throughout the day, and camp-out beers with friends at night. Double wall vacuum insulated stainless steel keeps beverages hot or cold for hours.

A powder-coat finish and non-slip silicone base create a highly durable exterior.

The leak-proof Pak™ Cap neatly stores the silicone Roll and Fold Lid neatly out of sight until it's paired with the removable cup. It can also be used to store small essentials like a tea bag or snacks. 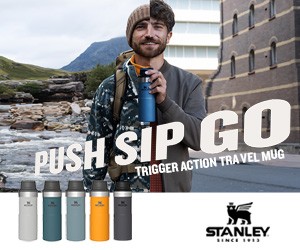 Packed full of ingenious features, the leakproof Trigger Action Travel Mug is the perfect partner from commute to crag. From mountain hike to city bike. Sip-on-the-go wherever you're going with the Stanley Trigger-Action Travel Mug. It's durable,...

Fully committed to the circular economy, Nalgene have pioneered the use of Tritan RenewTM resin to construct their iconic drinks bottle.

Fully committed to the circular economy, Nalgene have pioneered the use of Tritan Renew resin to construct their iconic drinks bottle. Built with a certified 50% material recycled from waste plastic, Nalgene Sustain bottles...

LifeStraw - Trusted in emergencies, trusted in the back country

Could the reason for the cup not be that if you drink straight from the bottle you scald your mouth? At least for the first few hours after putting your coffee in? A standard flask has a lid-cup normally for this reason (and I fully recommend the slim 500 ml ones from IKEA for less than 5 quid/Euro - at least they were when I bought my two a few years and 10 years ago).

You could, but given that the cup is also insulated it doesn't cool down that quickly, so there wouldn't be too much difference (a bit, but not a lot - particularly with the lid). Throughout the last few months of use I've bascially used either/or, because they don't make a great deal of sense together for the reasons outlined within the review. Both are incredibly well made and work really well, but when combined - I just fail to see the benefit.

Whilst I haven't used the IKEA model, that is the sort of design I was referencing as a more logical and functional design (i.e. a long flask w/ small cup). To me that style makes far more sense. If you don't want that, just get a bottle - simple...

The fact that the MultiBev costs ten times more makes it a challenging sell.

That makes sense! So it has a hidden lid for the cup, which keeps whatever is in the cup nearly as warm as what is in the flask. Yeah, a bit odd.

What are the odds that the designers were thinking of people (website designers or similar 'creatives' in Shoreditch or Brooklyn presumably!) carrying their coffee into work and then putting some of the coffee into the cup, putting the lid on it, and sipping from that for the next hour or so as they get on on with their work on their big iMacs? :) (And yes I am just jealous that I'm not young and fabulous... Anymore.)

Funnily enough, the comment I received whilst using it at the crag was exactly that - "it'd sell like hot cakes in London".

Perhaps that's it, maybe it is designed with a more urban user in mind? Whilst it's clearly suitable for the outdoors, there are - at least in my view - other products that are arguably more efficient in design, functional in terms of usage, and competitive in terms of price.

I'd maybe forgive it if the relative capacities of the flask and cup made more sense. 3:1 or even 2:1 would provide for decanting from a hot flask into an insulated cup during a day at a desk or on a commute.

Dan Bailey and family road test a selection of water bottles. What will they find to say about them?

They're tough, they're light and they keep things hot for ages - and that's pretty much all you could ask of an insulated bottle, says Dan Bailey

Our resident tea drinker takes on the challenge of reviewing a flask that actually has a point of difference beyond colour - namely, that it keeps things much hotter for far longer.

The new TrailBreak EX Vacuum Bottle from Primus is a sturdy and effective flask. It's ideal for winter hillwalks, says Dan Bailey, but is it a bit heavy for climbing?