Skip over navigation
New Topic Reply to Topic
Please Register as a New User in order to reply to this topic.
Climbing Centre Group 23 Oct 2019 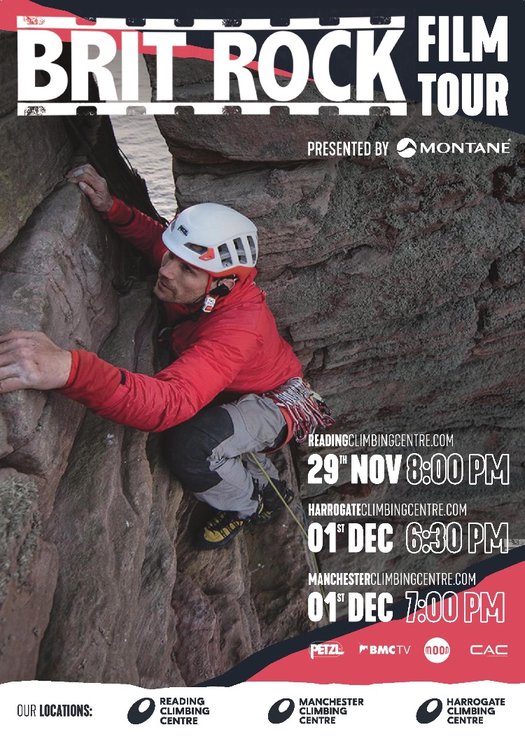 The Brit Rock Film Tour is back for 2019 with its strongest line up to date.

The Brit Rock Film Tour comprises the best new climbing films, from the UK’s top adventure filmmakers, featuring some of the country’s most popular climbers. Leading filmmaker and founder of the Brit Rock Tour Alastair Lee is collaborating with the best of the UK’s adventure filmmakers as well as his own new productions resulting in this stunning new line up of compelling stories from the vertical world. The action-packed program includes the films listed below.

CLIMBING BLIND – the incredible story of the first blind lead of the Old Man of Hoy, directed & produced by Alastair Lee in association with Montane.
Jesse Dufton was born with 20% central vision. At four years of age Jesse was diagnosed with Retinitis Pigmentosa: a rare genetic disease that breaks down the retinas' cells. At aged 20 Jesse could no longer read, by the time he was 30 his vision was reduced to just light perception with around 1 or 2 % field of view. As a life long climber, Jesse flies in the face of adversity training for world cup events and leading traditional rock climbs with his sight guide and fiancee Molly. As his sight degenerates his climbing continues to make remarkable progress. Despite his devastating condition Jesse only takes on bigger challenges by attempting to be the first blind person to make a 'non-sight' lead of the iconic Old Man of Hoy sea stack in Scotland.

Little Flame – produced and directed by Paul Diffley
Paige Henry is a young woman suffering from PTSD and depression. She finds relief through spending time outdoors; rock climbing, wild swimming and tree climbing. Paige sets her sights on climbing her hardest route to date at Pen Trwyn on the North Wales coast. This film will remind everyone of the joy to be had in the outdoors.

The Big Deal – produced and directed by Alastair Lee
An action-packed profile of one of the UK’s strongest female boulderers on rock; Frances Bensley. We follow Frances’ journey on some stunning and hard problems throughout the UK. Beautifully filmed this revealing short revels in Frances’ insightful and refreshing approach to bouldering all accompanied by her every enthusiastic and entertaining sister Alice.

Dream of White Horses - produced and directed by Paul Diffley

A celebration of one of the UK's most impactful climbers: Edwin Drummond. We pay tribute to his life with a look at the historic first ascent of what's now considered to be one of the world's greatest trad multi-pitches 'A Dream Of White Horses'. Located on the spectacular cliffs of Gogarth this ascent was made by Ed Drummond and Dave Pearce in 1968. We bring the ascent to life through reenactment with James Mchaffie and Lex Pearce (Dave's son) accompanied by Ed's poetry which was as big a part of Ed's life as climbing. The two blend together beautifully in this atmospheric tribute to a man who changed the climbing scene forever.

Don't miss your chance to see Brit Rock at your local CCG centre, and for ticket sales visit...