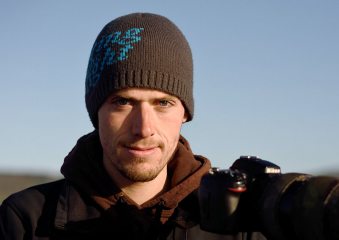 Britain's most northerly major ridge traverse in a single gruelling day, at the darkest possible time of year..? James Roddie goes in for no half measures on the classic wild round of Foinaven and Arkle.

Amongst the endless grey and frustration that defines the start of so many Scottish winters, sometimes we're thrown a gift. When the calm and cold weather of late November 2016 promised to continue into the next month, my thoughts turned to a hill day which I have kept back for years in waiting for exactly the right moment.

The crossing of Foinaven and Arkle is Scotland's most northerly classic ridge traverse – it's a formidable day over continuously rough ground which plenty of hillwalkers take two days to complete even in the summer. I had one free day, and it was one of the shortest days of the year. With a feeble seven hours of december daylight, would I be able to spend the sunrise on Foinaven and the sunset on Arkle?

The night-time drive from Inverness set the scene beautifully. The last thirty miles of freezing fog and birch trees adorned with demented frost formations accentuated the feeling of arriving in the furthest north. It was -10 degrees when I left the car at 5am, but I couldn't help but simply stand and look at the night sky for a few minutes when the fog started to clear. The 'Pole Star' looked to be almost directly overhead, and the constellation Orion kept me company as I started the long approach to Foinaven. And then, ever so faintly, the aurora borealis made its appearance to the north.

My headtorch picked out twisted trees and the ghostly eyes of stags peering at me out of the frost. With the roaring of the falls of Eas Allt Horn in my ears, the track took me between what appeared to be the two halves of an immense boulder split in two. In the dark it took on the form of a grand gateway to the hills that lay beyond.

Dawn took forever to arrive. I felt to have covered a lot of ground by the time I reached the bealach but in reality I'd barely started. Scattered peat hags were not what I'd been expecting when I began the ascent up Foinaven's south-eastern flank and progress was a little slower than I'd hoped. After a kilometer the vegetation started to give way to rock, and I had a rude awakening when a layer of frost covering a slab almost took me off my feet.

When sunrise finally came it was vivid and freezing. Foinaven's first top was still a few hundred metres in the distance but I stopped where I was to watch things unfold. A band of high cloud to the south slowly became purple, then pink. With surprising abruptness everything around me transformed, and one of the greyest mountains anywhere turned to gold.

The top at 808m marked a change in the character of the day. Plateau became ridge and the terrain ahead looked markedly more involving than what had come before. A steep descent through shattered quartzite was something of a rude awakening after the easy ground I'd been covering. The path became a scramble as I descended the loose and fractured ground leading to Cadha na Beucaich, and for the first time my attention was drawn away from the delights of the prolonged dawn. The flat calm was broken by a fierce gust from nowhere as I reached the bealach. It was strong enough to almost overbalance me but it was gone as quickly as it had arrived. Back to stillness.

Dawn had given way to morning as I began the steep pull up to Lord Reay's Seat. A blue haze filled the shadows on the cliffs of Coire na Lurgainn - a deceptively spring-like scene on a winter's day. To the north a golden eagle made a fleeting appearance, its huge form briefly silhouetted against the sky before disappearing behind a buttress.

Another steep descent marked a narrowing in the main ridge and for the first time I was forced on to unavoidable snow. It was icy and demanded concentration. More fierce gusts appeared out of nowhere – wild updrafts sweeping across the narrowest sections of ridge that interrupted the silence. My hair and eyebrows started to frost up.

Ganu Mor felt like an exceptionally remote place. When I stood on the summit around mid day I was taken aback by the unique quality of the views that surrounded me. You know you are a long way north when Suilven and Quinag look so small to the south. And from how many summits can you see both Orkney and the Skye Cuillin? Looking out west past the Butt of Lewis, the most northerly point of the Hebrides, the view was one of the open ocean, unbroken by any islands.

Afternoon did not happen. Morning simply blended into evening - the sun keen to return to the horizon. I had less than three hours to make Arkle's summit ridge in order to make the sunset. I decided to run the return to Cadha na Beucaich in order to give myself some more time, slowing only for the unavoidable areas of snow. The descent off Foinaven towards Loch na Tuadh and Arkle was on relentlessly steep scree. I was still feeling fresh but doubts had started to emerge about making Arkle for the rapidly approaching sunset. It still looked a long way away, and I had a 600m re-ascent to tackle.

As I passed the eastern end of Loch na Tuadh my doubts increased. The only option for ascending Arkle from this side looked improbably steep and loose, and fatigue was now quickly beginning to set in. I continued, hoping things would look kinder at closer quarters. They didn't, but I started picking a line up, aiming for some vague breaks in the steep quartize bands a few hundred metres ahead. For every one step forward I seemed to slide two back, but with some persistence I started to make progress up the scree. The quartize bands were deceptively easy and the scrambling was brief if insecure.

I was starting to lose energy and I was more dehydrated than I'd realised. The scree seemed endless and the last 200 metres of ascent to Arkle's northern top was a real effort. I made the ridge with 10 minutes to spare before sunset. As soon as I had the camera and tripod set up, the light once again turned the hills to gold. It seemed hardly any time at all since I'd been photographing the sunrise. The way on to Arkle's main summit was a remarkable quartzite 'pavement' split by wide slots and cracks, some of them deep enough to swallow me whole if I'd not been taking care. From here Foinaven was beautifully framed by the great glacial trough of Am Bathaich and I spent a while taking photos. Despite my fatigue the vibrancy of the sunset gave me a second wind and I reached the summit far more quickly than I'd been expecting. It was a little after 3.30pm.

Everything to the north quietly glowed in the light of the dusk. Layers of mist were rapidly forming on the distant hills of Assynt and away to the west the sea had taken on a dark, almost purple hue. Frost was starting to appear on the ground again and part of me was tempted to just sit for a while to watch the night fall. The allure of sleep and rest were too great however, and I started my descent off Arkle down endless quartzite and frozen grass.

It was fully dark by the time I reached the Bealach Horn path and it seemed to take an age to reach the 'split boulder' that had greeted me on my way in. The stags I'd seen in the morning were still in the same place and I couldn't avoid a sense of deja vu as I spotted familiar trees and landmarks in the light of my headtorch. Eventually it was only a few more hundred metres to the road, but I stopped a few times to look at the starscape again before the cold hurried me on my way.

Start/finish point: Carpark 1km north of Achfary on the A838

Route notes: Arguably one of the best hillwalks in the UK – inspiring, remote and everything you want the far north to be. It is a strenuous route over many miles of rough and loose ground, with some easy scrambling and a major descent/re-ascent of 600m between Foinaven and Arkle. A one-day traverse in winter is only feasible for extremely fit walkers with firm or lean snow conditions. After heavy rain the river crossing at the end of Loch na Tuadh could be problematic. Wild-camping opportunities are limited but a pitch near Bealach Horn would significantly reduce the walk-in. Alternatively a pitch in the vicinity of Loch na Tuadh or Loch an Easain Uaine would allow the route to be split between two days.

James Roddie is an award-winning photographer and writer specialising in the wild places and wildlife of the Scottish Highlands. He is an active hillwalker, climber and caver based near Inverness.

For more of his images and writing see www.jamesroddie.com

mcdweeb
28 Feb, 2017
Thanks James, really enjoyed that. Its a good reminder how great and neglected the far NW is. Shhh, its a bit of a secret. Keep going beyond Ledmore Junction and Kylesku. Its puzzling how we mythologise the American west in songs and yet we have our own frontier up there. Never mind the "Wichita Linesman", whit aboot the Laxford Bridge Gritter Driver, mebbe, mebbe no.
Add Comment

Biggest isn't necessarily best - and here are ten good reasons why not. For sheer presence these pint sized upstarts easily outshine most hills twice their height. More than just scenic viewpoints with a nice outlook on taller neighbours, these mi...

Whatever you get from Galloway, it won't be what you were expecting, says Ronald Turnbull, Galloway resident and author of a new guidebook to the area.

There's far more to North Wales than its summits. Staying low reveals a gentler but no less fascinating side to Snowdonia, says Alex Kendall, author of a new guide.

Previously the playground of rock climbers and mountain bikers, the Anti-Atlas has much to offer walkers too. David Wood,...

Guidebook author Adrian Hendroff describes ten of his favourite walks in the Mourne and Cooley Mountains, a spectacular corner of...

Majestic and adventurous, the Jotunheim mountains are the true alpine peaks of Norway. If long sharp ridges are your thing, the area is a...

Trail and Fell Running in the Lake District

Easy Walks in the Gran Paradiso