There's much more to Yr Wyddfa than mere height. For our series of bite-sized intros to Britain's favourite hills, Alex Roddie joins the throng on the roof of Wales (bet he didn't take the train!)

Personality: Jagged, complex and sprawling. The Snowdon massif blends something of the Carneddau's scale with the serrated and intricate nature of the Glyderau, offering a range of walking, scrambling and climbing delights to suit people of all ages and abilities.

Another busy mountain, then? Just a bit. While the other two of the Three Peaks can't be considered quiet, it's currently estimated that Snowdon sees around 582,000 visitors a year – that makes it the busiest mountain in the UK, and the third-busiest tourist attraction of any kind in Wales. The vast majority of those visitors either climb the mountain via the relatively easy Llanberis path, or take the Snowdon Mountain Railway to the top.

What's in a name? 'Snowdon' (never prefixed 'Mount') translates to the rather pedestrian 'Snow Hill' in English, but the Welsh Yr Wyddfa is more evocative – 'the tomb' or 'the barrow', thought to refer to the cairn marking the resting place of the giant Rhitta Gawr after he was defeated by King Arthur.

King… Arthur?! Snowdonia is rich in Arthurian folklore. If you believe the tales, the once and future king must have been an enthusiastic hillwalker, for many places in the Snowdon massif lay claim to some association. There's Llyn Llydaw, reputed to be the lake into which Arthur cast Excalibur – or perhaps it was Llyn Dinas or Llyn Ogwen not far away. There's the col of Bwlch y Saethau ('pass of the arrows') where Arthur received a fatal wound, according to legend, and was buried high on the col. And then there's the cave somewhere in the cliffs of Lliwedd where Arthur's knights sleep through the aeons and await the call to aid their country once again.

Not all Snowdon's folklore relates to King Arthur. Another legend has it that the high lake of Glaslyn was used to imprison a monster that had been bothering the Vale of Conwy. According to this tale, the creature is responsible for killing all the fish in the lake – and is likely to drag other living things beneath the surface to devour them too. So watch out, hillwalkers, if you feel like a paddle in Glaslyn's cool waters…

Best route for walkers: Snowdon is blessed with several routes of high quality. The Pyg Track from Pen-y-Pass is a serious contender: it's relatively short and starts at a fairly high altitude, taking you through tremendous scenery. However, the winner has to be Snowdon's South Ridge. This route via the Rhyd-Ddu path is unfrequented compared to most of the others and finishes up a lovely ridge on the quieter side of the range.

If you don't mind getting hands-on, it would be remiss not to mention the ultra-classic Snowdon Horseshoe, often described as one of the finest ridge scrambles south of Scotland. This popular outing reaches Snowdon's summit by stringing together the narrow arêtes of Crib Goch and Cryb y Ddysgl, before descending via Y Lliwedd's slightly easier ridge. There's sustained Grade 1 scrambling (or grade I winter climbing, in season) with thrilling exposure and plenty of hands-on-rock moments, but on a good day the main challenge is often the crowd of other walkers threading their way along the crest. This route is not to be underestimated. While you don't need climbing skills to take it on, it's more difficult and dangerous than other routes accessible to walkers on any of the British Three Peaks.

And for climbers: True to its rugged appearance the Snowdon massif boasts several major crags: above the Pass of Llanberis, Cyrn Las and Dinas Mot; deeper into the massif, Lliwedd and Clogwyn Du'r Arddu (aka Cloggy). All have long and illustrious histories. The highest mountain cliff in England and Wales, Lliwedd was one of the first to be systematically explored by early rock climbers before the First World War. Using nearby Pen-y-Gwryd and Pen-y-Pass as bases, they first attacked the obvious targets – the gullies – before turning their attentions to the more technical buttresses and ridges in between. This fledgling Welsh climbing scene was put to a sudden end by the Great War, which decimated the community of climbers who frequented the crag.

'Cloggy' actually saw a very early first recorded rock climb – in 1798 via the Eastern Terrace (M**), by two botanists looking for alpine plants – but was not significantly developed until much later, due to its greater steepness and difficulty. Today it is widely regarded as one of the best crags in the world. Its many classic routes span the grade range, but perhaps most famous (and least often climbed?) is the legendary Indian Face (E9 6c***), a route that pushed the boundaries of hard, bold climbing in the 1980s.

Finally, Snowdon itself should not be forgotten. Clogwyn y Garnedd (or the Trinity Face) is the NE Face of Snowdon, and a classic winter crag with many easy routes. It's also known for some of the more reliable conditions south of the Scottish border, although avalanche risk can be appreciable at times.

Summit squalor and rack railways: Snowdon has a long history of man-made structures – longer by far than its history of climbing as we understand it today. In 1820, an early summit shelter was demolished and used to build a 'wretched vile hut' a few yards below the cairn to provide respite from the elements and, later, simple refreshment. Soon afterwards, the Ordnance Survey constructed the massive cairn which stands to this day. In 1854, the summit area of Yr Wyddfa was found to include 'a rude cabin, in which refreshments are sold, and in which a person resides throughout the year, though there are few or no visitors to the hill's top, except during the months of summer.'

Two hotels were later opened on the summit, operating in fierce competition – but there were often more visitors than beds, and conditions were described as 'squalid'. By 1898 the Snowdon Mountain Railway and Hotels Company had taken over the hotels and started to rebuild them. After the Second World War the hotels were permanently closed. The most recent building on the summit, named Hafod Eryri, was opened by the First Minister of Wales on 12 June 2009.

The railway itself began operation in 1896, and is the only public rack and pinion railway in the UK. It extends over four miles from Llanberis to the summit, and carries over 130,000 passengers annually.

Locomotive flying out of the mist: On 6 April 1896, the official opening day of the Snowdon Mountain Railway, disaster struck. Although the ascent went without incident, the first engine got into difficulties on the way down, a few hundred yards above Clogwyn Station. The driver was unable to keep the engine under control and the wheels jumped from the track, resulting in the train running away and over the edge of the cliff while the carriages detached and came to a standstill. Fortunately the driver and firemen leapt from the engine before its descent, but a passenger in one of the carriages thought he would do likewise, and suffered fatal injuries when he struck his head on the rocks beside the track. The second locomotive, right behind the first, then piled into the back of the carriages at Clogwyn and was derailed. Fortunately there were no further injuries.

Climbers on the cliffs below later reported seeing a locomotive flying out of the mist towards them – but mistook it for a boulder at first.

The Everest connection: There's a long-standing connection between Everest and the Snowdon massif. Although many aspirant Everest climbers have scrambled on its flanks – including George Mallory, who was a member of that pre-WWI climbing group – the nearby Pen-y-Gwryd Hotel was home to the 1953 British Everest Team when they were training for their successful ascent. Today, the hotel is a museum to Everest history and you can examine memorabilia such as nailed boots and oxygen cylinders while you drink your post-hill pint.

Where to stay? The YHA Snowdon hostel at Pen-y-Pass can't be beaten for convenience of location, but it gets extremely busy – booking essential. In Llanberis, there's the Alpine Lodge Hotel or Y Gwynedd Inn & Bunkhouse.

Local pub: For mountain ambience, the Pen-y-Gwryd can't be beaten. A little further afield, in Nant Peris, the classic climber's pub is the Vaynol Arms. 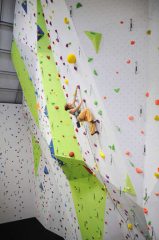 For our series of bite-sized intros to Britain's best loved hills, Alex Roddie takes on the beast of Torridon, the mighty Liathach